The Bicolor Angelfish, Centropyge bicolor, is one of the most recognizable fish. The deep royal blue on its back half, contrasts nicely with the bright yellow front half, giving it a stunning coloration. Various detailed names that this this dwarf angel are known by include the Oriole Angelfish, Two-Colored Angelfish, Pacific Rock Beauty Angelfish and the Black and Gold or Blue and Gold Angelfish. The word Oriole is derived from the Medieval Latin word “oriolus” which essentially means “golden”. 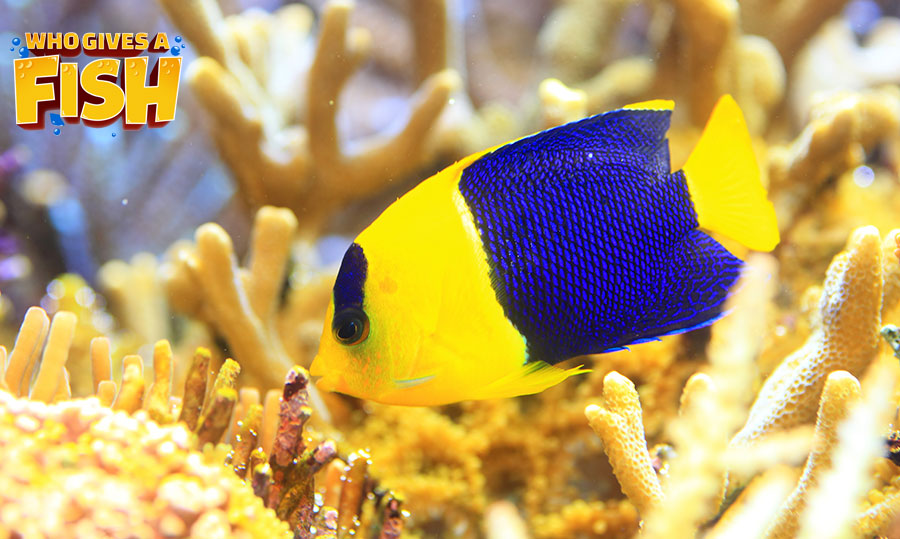 However, just because the Bicolor Angelfish is a very well-known fish that does not necessarily mean it is a good angelfish for a reef aquarium. The Bicolor is the least reef friendly out of all the dwarf angelfish. Acquiring a juvenile is your best option, as they are willing eaters and can be effortlessly trained to aquarium fare. Bigger specimens are known to only feed on some algae, however their preference is often corals, worms, sponges, large polyped corals, and tunicates and have also been known nip on the mantles of clams. However, this particular angel makes up for its deficiency of coral compatibility with its stunning coloration. It is an excellent addition to a “fish only with live rock” aquarium (FOWLR).

This is an excellent sized dwarf angelfish, which can reach up to 5.9 inches (15 cm) in length. This fish is not as effortless to maintain as many other angelfish. Since it has been in captivity, even advanced aquarists are not able to keep the Bicolor Angel outside the acclimation period. These days however, with further net catching methods being used for gathering, this attractive fish is considered much easier to keep in captive systems these days.

A proper sized tank of at least 60 gallons, with algae growing on live rock is suggested. Make sure they are presented with plenty of hiding places and a diet which comprises of worms, small crustaceans and vegetable matter. They are combative for a dwarf angelfish, notably in a tank that is under 75 gallons. Housing them with more semi-combative to combative fish would also be advised. 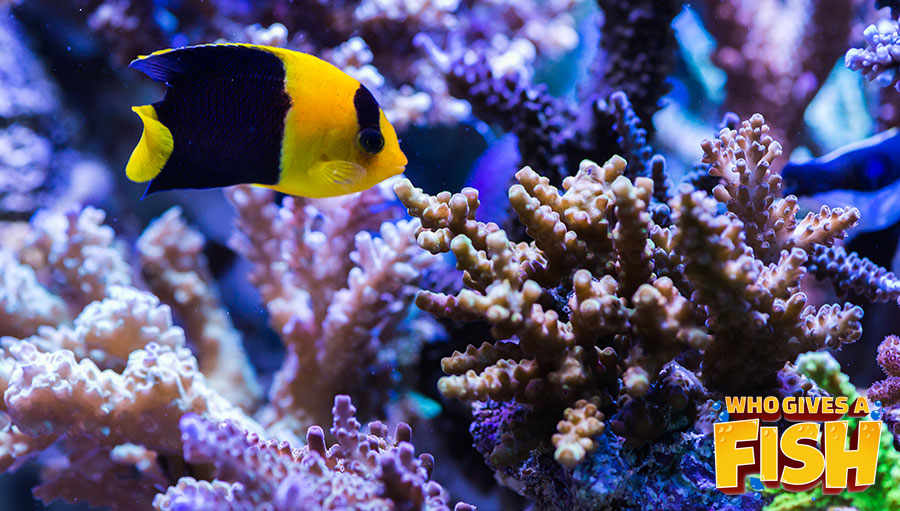 The deep contrast of this fishes colors, against coral, make for an excellent addition to your home aquarium.

The Bicolor Angelfish is fairly hard to maintain. Size and Water quality are crucial. As with all angelfish, it is important to keep the pH to a minimum of 8.0. They are not as lenient in water quality, as the clownfish, so undertaking water changes equal to your specific inhabitants of the tank are crucial. If the tank is 55 to 60 gallons, a bi-weekly change of up to 15% is sufficient. If your tank is above 100 gallons, a change of 20% every 3 weeks to a month will suffice.

The tank is required to be at least 55 gallons for this particular dwarf angelfish. A tank that is longer, as opposed to taller is required as they are known to swim near the bottom most of the time. Nano tanks cannot be used, even when they are in the younger stages. If housing a mated pair, then 75 to 100 gallons would be sufficient, and over 150 for 2 fish that are unsexed. Provide water limits of: pH 8.0-8.4, 73-82° F and sg 1.023-1.025.

Make sure to provide plenty of live rock with an abundance of hiding spots, particularly around the bottom of the tank, is useful in respect to keeping them happy. The live rock should have algae growing on it before you acquire your Bicolor Angelfish. Endeavor to have your tank up and running for a minimum 6 months prior to considering a dwarf angelfish. Make sure to add dwarf angels to the tank at the around same time and as latest additions. 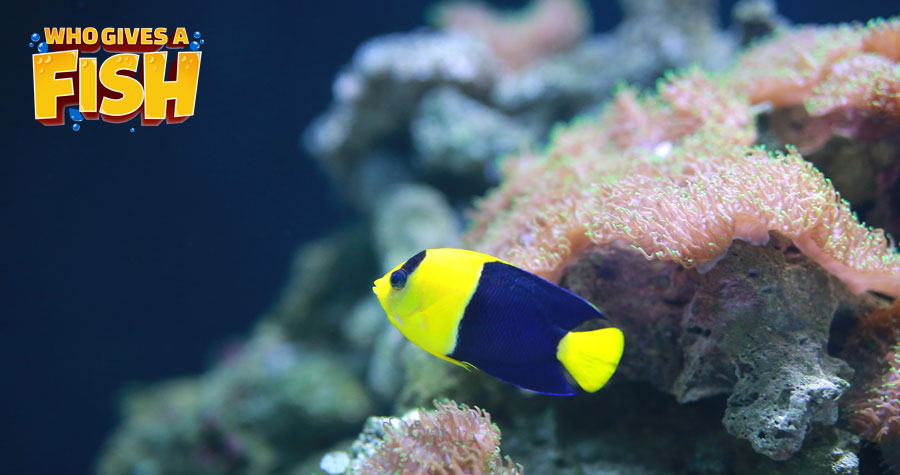 A young Bicolor Angelfish in a home aquarium

The Bicolor Angelfish is somewhat hard to maintain, but with the correct care they could be placed at the intermediate aquarist level. They are possibly one of the most combative dwarf angelfish, so make sure to choose tank mates carefully. Acquiring a small juvenile will often result in higher success, because they will take a greater variety of foods.

The Two-colored Angelfish were originally thought of as hard to maintain previously due to the use of cyanide poisoning to catch them. These days, netting methods are utilized in order to capture these fish, thereby allowing a higher success in captivity. Though the Bicolor Angelfish is not as dependent on algae as other dwarfs, they still require live rock combined with algae. Though they are 2″ longer than other dwarfs, their tank size can stay to the same 55-60 gallons, as their adult mind set will impart itself to eating meatier foods as well as other types of sponge material flake and spirulina.

Though it is an omnivore, the Bicolor Angelfish will consume meatier foods than other dwarf angelfish. They will eat a bit of algae, usually around 30%, but as they grow older they will feed on any sponges, worms or corals you may have. It is imperative that you feed angelfish a wide variety of frozen, live, and prepared formula foods.

Supplying them with decent prepared foods combined with spirulina algae, along with finely shaved fresh or frozen shrimp and mysis, and angelfish food that has sponge material enclosed. There are a few excellent commercial foods available including Angel Formula and Formula II. 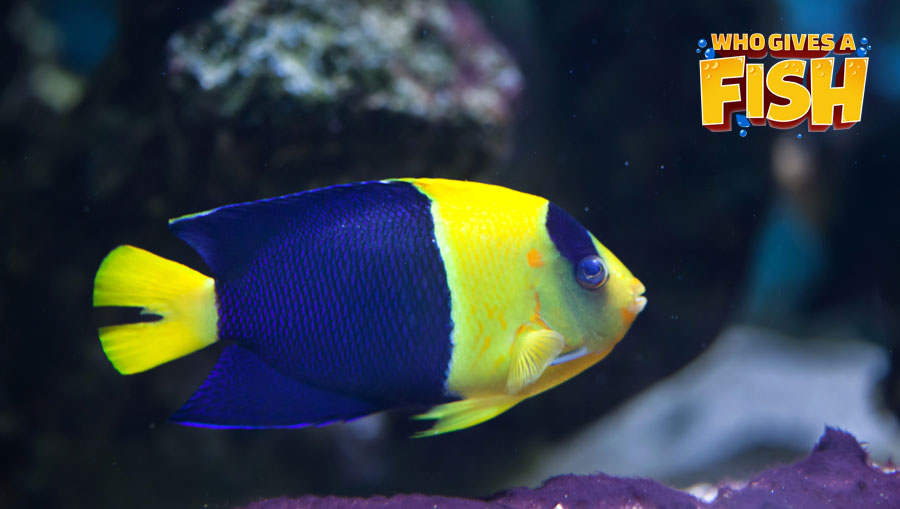 These fish are protogynous, and as such, the female and the male are able to reverse their sexual orientation within 20 days. The only distinguishable trait to aid in separating the male and female is that the male develops a dark line under and through the eyes during lovemaking.

As yet, they have not been successfully bred in captivity. In the wild, the Bicolor Angelfish will attain sexual maturity at around 2.4 to 2.7 inches (60 to 69 mm). It has been noted that all Centropyge dwarf angelfish have a spawning routine that is very similar. Centropyge spawning generally comprises of the female and male circling each other when they encounter, followed by the male producing grunting noises. The male will consequently swim upwards from the bottom, float, and tilt his body towards her at a 45 to 90 degree angle.

If she is ready to breed, the female will unite with the male and the two of them will soar upwards together. When the soaring action is complete, and this can vary among dwarf angelfish breeds, the male will nuzzle her stomach for around 18 seconds, preceding the male opening and closing his mouth and flashing his pectoral fins. Immediately, they are belly to belly, freeing gametes and creating fertilized eggs. The eggs are on their own and will not be guarded by either parent. The two of them will then hurry back to the bottom, with the male pursuing the female for a short period, and then moving onto the next compliant female.

The Bicolor Angelfish is possibly one of the most combative dwarf angelfish, if not the most combative. Make sure to add them last to any environment, and if you are obtaining more than one, add two together. Housing them in a tank that is around 75 gallons is advised, as it will permit them to have their own domain without feeling the need to assault any other inhabitants that happens to swim past. They will chase anything that feels threatened by them in a 55 gallon tank
Placid fish, as well as sluggish moving fish will not gel with them unless the tank is much bigger than 55 gallons. Even a few of the smaller semi-combative fish such as the anthias could be pursued for this reason. Be careful with anthias, as they will hide the entire time when they do not feel secure, they will shrivel and die from starvation. House it with bigger semi-combative fish such as bigger tangs and big fish that will not be harassed, but not too big that they would devour the Bicolor.

Housing this fish with other dwarf angelfish is recommended only in a much larger tank, an aquarium over 100 gallons is preferred, but can go up to 150 gallons. This is because of the combative nature of the Bicolor. House them with dwarfs that are various colors, shapes and sizes. The best bet is to add the Bicolor last, once the other inhabitants have already been established. Ensure your tank has plenty of algae growing and lots of hiding places and caves created within the rock, if you are making a dwarf angelfish tank.

Just like all dwarf angelfish, they can be housed with the more poisonous corals. They just don’t appeal to the Bicolor Angelfish. These comprise of a few soft coral genera from the Leather Coral families including the Paralemnalia, Sinularia, Cladiella and Sarcophytom, and one from the Xenia clan, the Effatounaria genus. A few people have had success with Mushroom Anemones and an anemone shielded by a hostile clownfish can endure in the same tank sometimes. As for clams and Large Polyped Corals (LPS), these will generally be nipped at until they fold up and finally starve. Polyps are a risk since a well fed fish will generally not trouble them. If you have a massive polyp community and the fish are not destroying it, then you can view at it as free food for your dwarf angelfish. Feather dusters, Starfish, and other fluffily appendage beings may be devoured, so watch them carefully. Large shrimp, Snails and crabs and are generally fine, but are best added prior to the Bicolor Angelfish.