The Blue Damselfish, Chrysiptera cyanea, is easily one of the most popular fish among saltwater marine hobbyists. These small fish are full of life and can always be spotted as their dazzling blue coloring joins with courageous personalities resulting in a constant array of activity. Despite never growing bigger than approx. 3 1/3 inches (8.5 cm), these little fish always stand out in any aquarium as the light shimmers off their electric blue scales. 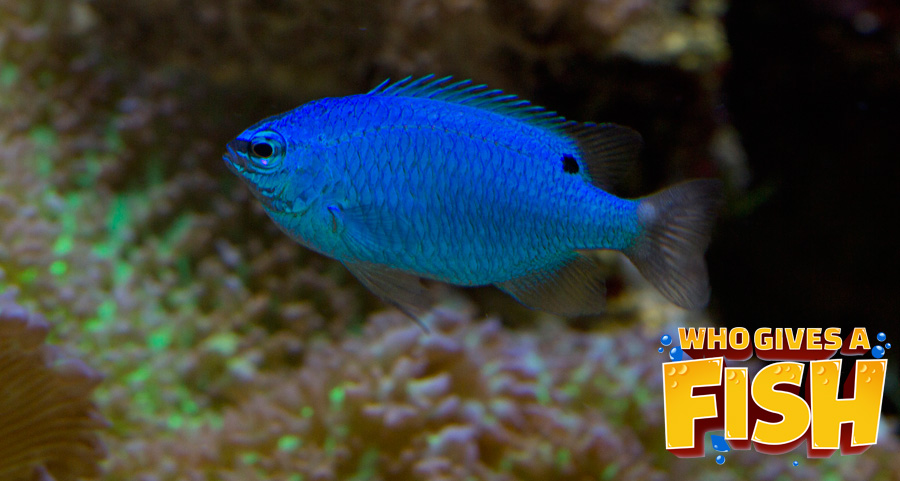 This Damsel species is dichromatic, which brings a clear sexual dimorphism (differences between male and female). When purchasing from a pet store, it can be hard to tell as many are still juveniles whom have not developed their mature coloring yet. During maturing, the majority of males with develop a yellow-orange coloring in the tail and even yellow on the nose in some cases. However, male Damsels from Japan and the Philippines are seen to be all blue, harboring dark margins on their fins. Females can be seen to be the same bright blue but will acquire a black spot on the base of their hindmost dorsal ray, as well as having clear fins.

This Damsel species is known by several common names such as Blue Damselfish, Orangetail Damselfish, Blue Demoiselle, Sky-Blue Damsel, Sapphire Devil and also the Blue Devil, all of which pertain to the color and confident personalities held by this species.

The Chrysiptera genus includes several bright blue damselfish, one being the Fiji Blue Devil Damselfish Chrysiptera taupou, also known as a “devil” with the only real difference being the name. A band of yellow color running along the entire lower part of the body can be seen on this Fiji Blue Devil which is not found on the regular Blue Devil. The Fiji Blue Devil is known to be the most aggressive of all damselfish within the genus, so marine hobbyists are encouraged to do all they can to avoid confusing these varieties.

Generally, the Blue Damsel fish can be purchased for cheap and are always very hardy. For this reason, they are a great choice among beginner aquarists. However, many experienced aquarists also enjoy adding several of these to their collections as they always bring plenty of color and life to any reef aquarium. Once these damsels mature, they more often than not become pretty aggressive. The majority of this aggressive behavior is seen from larger males, and rarely from juveniles or females. These males will often be seen displaying dominance over other more passive species such as Firefish, Blennies, Cardinalfish and Gobies etc. Large males do come with the added difficulty of often limiting what other fish can be added to the tank, especially if the display is small. On the plus side, Damsels are known to be “reef safe” as they won’t disturb corals and invertebrates. 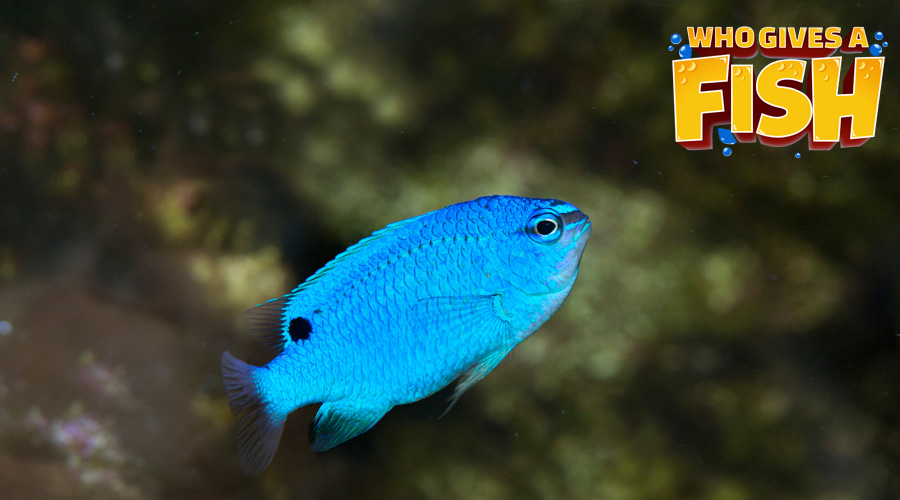 The Blue Damselfish is a safe addition to both reef and fish only environments. As they are comparatively small in size (3 1/3 inches (8.5 cm) in length) and known to dwell mostly in the mid-lower segments of the water column, they make good tank mates. If keeping this species, a minimum of 30 gallons is required with each single fish or mated pair. If numbers grow above 2, it is recommended to have at least 40 to 55 gallons with plenty of hiding spaces available in the rock work. A minimalistic rock display is not an ideal setup for a pair of Damselfish, especially when paired with other species. As large males hold bold and aggressive personalities, it is advised to select tank mates and rock displays to accommodate both the damsels and other more passive species.

The provision of hiding spots is very necessary. Substrate and water movement patterns are fine for this species. If there are being added to a coral environment then this needs to be accounted for. They will tolerate temperatures between 72˚F to 84˚F (22 – 28˚C) and a pH of 8.1 to 8.4. Ideal spawning parameters are known to be between 79°F to 83°F (26°C to 28°C) which is also found within Clownfish. 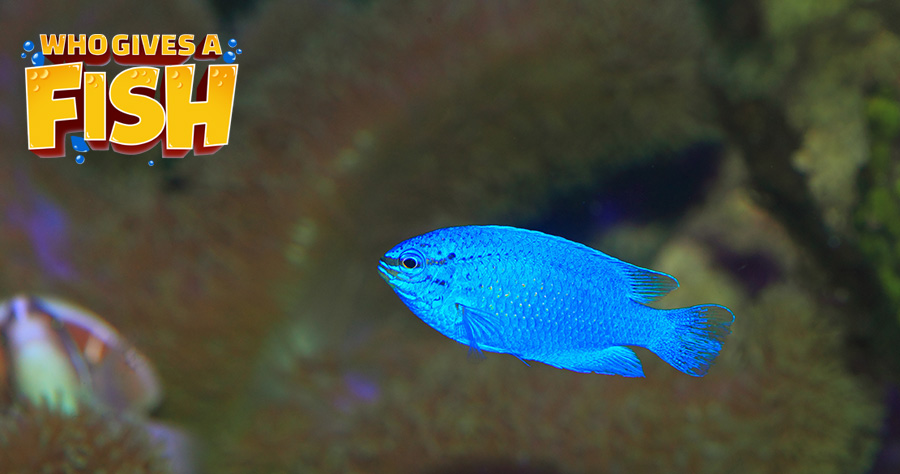 The Blue Devil Damselfish are without a doubt some of the easiest of all marine species to care for, often being chosen by beginners and at the early stages of tank development to begin a steady eco system. An ability to adapt quickly to new environments, the Damsels are almost always a safe purchase provided they owner is aware of the behavioral changes that will occur with maturity. These fish will thrive in both coral and fish only setups, and are known to eat a wide range of food types.
One of the reasons they are a great first purchase is their ability to tolerate fluctuating temperatures within the aquarium.

However, they will still fall victim to prolonged exposure to poor water conditions. A general rule of thumb is any tank should contain 30 gallons for 1 single fish or pair of, requiring water changes to be more frequent in a smaller display. Ensuring proper water conditions are kept, a range of food types provided and a cohesive selection of tank mates will ensure a long and healthy life for these Damselfish.

These Blue Damselfish are known to be Omnivores. In the wild they have been seen to eat capillaceous algae as well as small crustaceans like planktonic copepods, planktonic fish eggs and amphipods. If keeping this species, it is advised to provide a range of meat and vegetable based foods.

These fish like most others, will benefit from a range of food groups. These include Mysis shrimp, brine shrimp (vitamin enriched if possible), seafoods purchased whole can be ground down and shredded to provide a rich array of vitamins and nutrients for omnivorous species. Encouraging healthy coloring can be easily done by offering flaked foods and pellets.
It is generally recommended to provide small feeds several times a day to help alleviate aggression during feeds. Many hobbyists will ensure any pellets being fed out are wet before adding to the tank to ensure they air doesn’t enter their digestive tracts.

As previously explained, this Damsel species is sexually dimorphic. Females are seen to be completely blue with the absence of any yellow or orange coloring. Females found in some parts of the world will display a black spot of the lower part of their dorsal fin. They will also sport almost completely clear fins, a strong contrast between their male counterparts who are seen with completely blue fins.

All of the Damsel species are found to shadow the breeding patterns of Clownfish. Breeding successfully requires perfect water conditions and ideally an environment that is predator free. It is found that optimal spawning will occur between temperatures of 79°F to 83°F (26°C to 28°C). An added difficulty in a captive situation can be found if tank mates include crabs, wrasses, serpents stars and brittle stars, all of whom are known to feed on the eggs of Damselfish. These eggs and larvae are a lot smaller than that of a Clownfish and are very difficult to rear successfully.

The Blue Devil Damselfish are known to breed and spawn quite often in a captive situation. Each mature male will hold its own territory which will be located near a nesting site. This will more often than not have some rubble or even half a shell from a clam at its entrance. The mating procedure is quite remarkable. The day prior to spawning the female will make a visit to the males within her colony and will include males she has mated with previously. Once an appropriate male has been selected, she will stop moving, face upward and flash a light ring around each of her eyes. Upon selection, the chosen male will begin an ambitious courting routine to impress the female. If he is successful, the female will then follow him to his nest to see how many eggs are present. Females have been observed to spend up to 20 minutes evaluating a males nesting spot before moving on to the next male. During this time, she is not yet ready to lay her eggs, upholding high standards for a nesting site. Known to travel over 100m in distance, females will inspect many males and their sites.

With the arrival of dusk the following morning, the female will travel to the selected males site. Often this male will be the biggest, with the most impressive courtship “dance” and holds the most eggs. Desirable males can often be chosen by several females. In this instance, each female will wait their turn at the entrance of his nest. It has been observed that up to 4 females can be seen at one nest site after all of them has chosen the same male.

Nest sites can hold up to 10,000 eggs, a combination from several females. Hopeful males will ensure they have as many eggs in their nests as possible to gain a higher chance of being selected. Some males have been known to abandon their small egg clutches and take over lager ones that have been abandoned by other males, staying guard over these eggs until they have hatched which can take up to 4 days. In this Chrysiptera species, the larval stage can last between 10-50 days.

Breeding in captivity can be difficult. Although they will often spawn easily, eggs and larvae or very small and the fry are extremely difficult to care for.

As seen in many species, the Blue Damselfish will often become very territorial and more aggressive with age and size. Pairs of Damselfish will become more aggressive as a pair compared to when they are found alone. It is possible to keep Damselfish in groups as long as owners pay close attention to the male/female ratios. In a medium to large tank, it is possible to hold one male with several females and or juveniles, provided there is ample hiding places. Hobbyists are advised to maintain a close watch on social behaviors in this group situation.

If being kept within a community of various fish species, these Damsels tend to get along better with moderately more aggressive and larger fish as these will help keep them “in check”. Being housed with smaller more passive species they are known to display aggressive behavior more frequently. Ensure a close eye is kept if they are housed with young Butterflyfish, Centropyge angelfish, Firefish, Cardinalfish, blennies and gobies.

If they are intended to be kept with fish such as dwarf angelfish, the tank should be at least 100 gallons with plenty of rock provided for other fish in the tank. Historically, they are known to do well with species such as Puffers, Dottybacks and angelfish or other species known to be able to defend themselves well. It is advised to not house them with any larger species that have the ability to devour them whole. Any predatory fish species should be avoided as tank mates, even if they are not big enough to swallow the Blue Damselfish whole. Some of these predators can prevent the Damselfish from venturing out of rock work and feeding.

A coral rich tank will be safe with the addition of the Blue Damselfish as they don’t bother corals or larger invertebrates. They are known to eat the odd copepod, so keep this in mind if you are housing species that rely on healthy copepod populations.