Bluestreak Cleaner Wrasses are most well known for cleaning other fish species of parasites. The cleaner wrasse is a very passive fish, performing a beautiful “dance” to entice other fish and calm them before cleaning. Cleaning of unwanted parasites are found on the bodies, mouths and fins of other fish serviced by the Cleaner Wrasse.

They have been seen to setup their own “cleaning stations” where other fish will visit to be cleaned and have even been seen inside the mouths of much bigger fish conducting their cleaning abilities.

As with all the cleaner wrasses, the Bluestreak Wrasse has a pretty bleak sustainability in captivity, even though it is thought to be one of the better survivors of the wrasse group. There is however a variety of other marine species that cover the parasite cleaning niche. There are generally readily available for purchase and well sustainable. These include cleaner fish like Gobies. Some juveniles of Angelfish have been known to clean parasites from other fish also. One of the more beautifully visual displays of cleaning comes from that of cleaner shrimps e.g. Lysmata and genera Periclimenes who perform cleaning from the sides of the rocks, and even attach to larger fish as they swim. 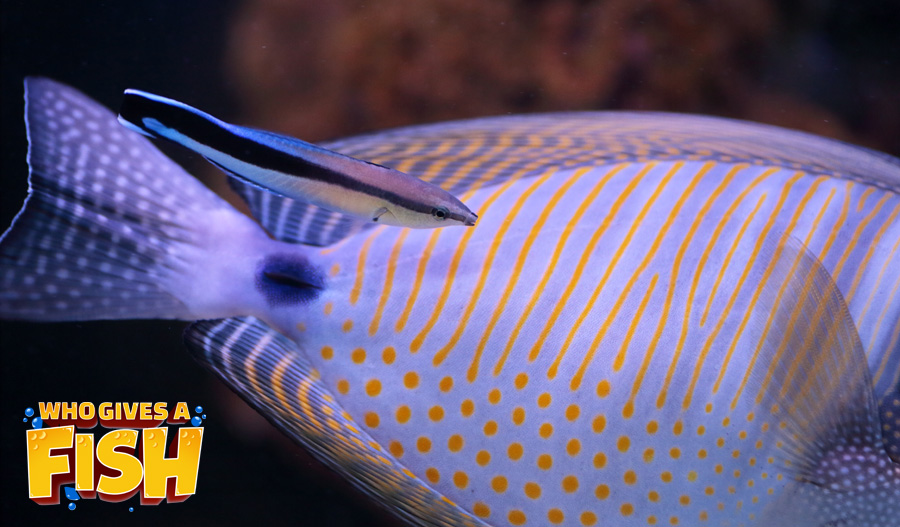 A Cleaner Wrasse with its Sailfin Tang host

Several successful reports of keeping these wrasses show that they are quite hardy once acclimatized to the conditions of a tank. Most of the Cleaner Wrasses that have survived the transportation from the wild and quarantine are seen to be eating frozen foods.

Like many small fish, they enjoy sleeping in nooks and crannies in the rock work and even seen to burrow into the substrate. Ensuring they have plenty of places to hide is important to lower stress levels. They are also known to often jump out of the aquarium, so a tight lid is recommended when housing them. 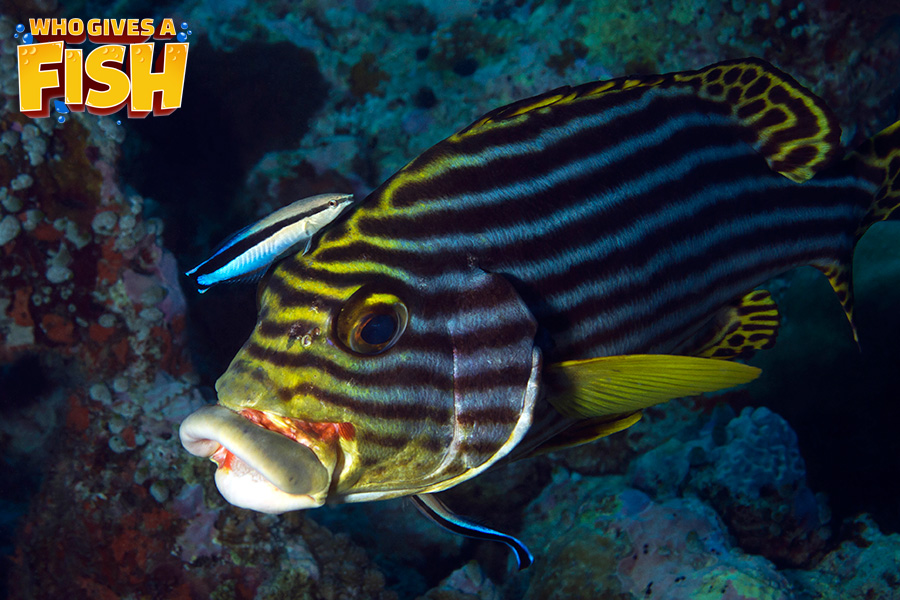 They are very difficult to keep at optimum health. They are peaceful fish and thought to be reef safe but are recommended to be kept by more experienced hobbyists. Regardless of being the best in terms of survival out of all Labroides, many of them will only last a few weeks before succumbing to malnutrition regardless of any prepared foods they are eating.

Cleaner wrasses are “obligate” feeders, as opposed to “facultative” feeds like cleaner gobies and cleaner shrimp. Facultative cleaners do not get their primary diet from parasites of other fish, whereas “obligate” feeders like these cleaner wrasses rely heavily on parasites for their main source of food. The majority of Labroides will eat prepared foods but still die from a lack of nutrition.

The Bluestreak Cleaner Wrasse is carnivorous. As their name indicates, their whole lifestyle revolves around and relies on the cleaning of other fish. They are classed as being obligatory feeders, obtaining nearly all of their required nutrition from consuming dead tissue, parasites mucous and other debris from the mouths, fins and bodies of other fish.

In an environment that is unable to supply this level of food naturally, feeding foods similar to their natural diet is needed, e.g. Daphnia or Cyclopeeze. Trying to get them onto foods such as clams, squid, brine shrimp is advisable, and people have even had success with chopped beef heart. Feeding frequently throughout the day will help replicate their naturally feeding habits in the wild as they are constantly feeding as they clean other fish. Getting them to eat other foods has been done but is quite rare.

With the best efforts in place to get them eating well, survival rates in the aquarium are still questionable. Often fish will look as though they are doing well with frozen prepared foods, only for hobbyists to see them slowly decline from a lack of proper nutrition. The BlueStreak Cleaner Wrasse, L.dimidiatus has been the most well recorded as being kept successfully, and even this is quite a low number.

White and Black Cleaner Wrasse in a home aquarium

The Cleaner Wrasse is a great addition to most reef aquariums

At the time of writing, there is no visual distinction between males and females. Mated pairs are known to breed quite frequently in home aquariums, but actual success rate is very rare. Courting rituals are very interesting to watch. Eggs from the Cleaner Wrasse are about the same size of the pygmy angelfish (Centropyge). They are released in the water column which generally happens around once per day during twilight hours.

The Bluestreak Cleaner Wrasse will live either singly or in groups. Adults often become solitary and quite territorial. In the wild, a pair of adults, group of juveniles or a group of females with a dominant male will setup cleaning stations. In an aquarium, they will form bonded pairs but it is hard to tell the difference between males and females. Because of this, different sized fish should be added to avoid aggression problems.

All the Cleaner Wrasses are known to be passive and non-aggressive, providing only beneficial aspects to the tank by feeding on parasites. A symbiotic relationship is formed between these Labroides and other fish in the tank that require cleaning of harmful parasites and debris. In return for their duties, they are often provided protection from these fish during times of threat. Labroides have even been seen cleaning moray eels. Fish who require cleaning will visit these “cleaning stations” regularly to be cleaned.

If intending to keep a cleaner wrasse, researching the types of fish most commonly cleaned buy the wrasse will help to provide the necessary nutrients they require. Also, any larger fish being added should be species that are known to recognize the cleaner wrasse for is abilities, not as a possible meal. Adding Anglers and Frogfish could see a quick disappearance from your wrasse.