The Condy Anemone, Condylactis gigantean, is also known as the Giant Golden anemone and are a commonly available anemone. Its tentacles are long tapering from its wide base and are seen as cream or white with tips that are peach, green, white, gold, purple and pink. They have the ability to grow up to 20” (50cms) which makes them a very impressive and eye-catching addition in any reef tank.

Their natural range extends from Bermuda to Brazil and also into the Caribbean. Because of their size they are also known as the Giant Anemone, the Giant Caribbean Anemone, Atlantic Anemone, Haitian Anemone and the Condy Anemone. The Condylactis Anemones are generally not too expensive for purchase and are a hardy coral for a home aquarium.

They should be housed in tanks that are no less than 50 gallons per anemone with temperatures kept between 68° and 75°F as they are subtropical. As with most anemones they have zooxanthellae living in their tissues and are photosynthetic. They do best when provided with moderate water flow and any type of substrate is ok.

They have been known to deflate at times, this “purging” behavior is not to be of concern if it happens once every few weeks, but anything more than that is concerning and may indicate your tank needs a water change. The Condy Anemone can grow quite large, reaching up to 20” (50cms) in diameter. Their life span however is still unknown at this point. Some anemones have been recorded to live for hundreds of years in the wild with some in captivity been reported at over 80. These anemones will frequently split in captivity also.

They will come in a range of colors from peach, green, white, gold, purple and pink. Mostly their tentacles will be a white or cream color with tips in one of the above colors or even just a small dot found on the end of each of its tentacles. Tentacles will be spaced out and quite a bit thicker at the base, then tapering towards the tip. They will have a wide sticky foot at their base that they use to adhere to different surfaces and use to move around. This is done by contracting the circular muscles found in the foot and pushing itself forward or can even crawl on their sides. This sticky foot is generally various shades of yellow, bluish gray or a brick-red color.

An oral disc is located at the top of the column with a mouth in the center, and tentacles around the outer margin of this disc. The C. gigantean will ingest food and expel waste through this same opening, which should remain tightly closed unless feeding or hungry. A wide gaping mouth is a sure sign of ill health. Folding up into a ball is done during times of threat or if water quality is not to their liking.

As this anemone grows very large, they should be housed in tanks that are no less than 50 gallons per anemone with temperatures kept between 68° and 75°F, with 79.0° F being the highest they can tolerate. Your tank should be at least 4 months old with stable conditions before adding one of these anemones.

The Western Atlantic is home to much live rock and sand environments, so these anemones need some live rock or other solid structures for them to adhere to and move over. Any substrate is acceptable with moderate water flows being ideal, as well as some moderately strong lighting.

These Condy Anemones are extremely mobile and are predatory in nature. You must ensure that all of your pumps are covered well with guards to stop the anemones wandering in and being minced. Foam filters should be places over any power heads intakes as well.

The Condy Anemone is rated as being moderately hard to look after as they have lighting requirements and need large tanks to support their potential size and mobile behavior. These anemones will unfortunately not tolerate higher temperatures so need to be kept in water that is between 68° to 75°F. Placing these anemones in new tanks will result in certain death, so your tank should be at least 4 months established or older before adding to your reef tank.

Before choosing your anemone to take home, ensure they have a good strong color, their foot and tentacles are sticky if touched and the mouth is closed. Their foot and tentacles should also be attached to something and never be bouncing around aimlessly. If they are pulled of a surface, they can receive damage to the foot so ensure this is in good condition if visible. 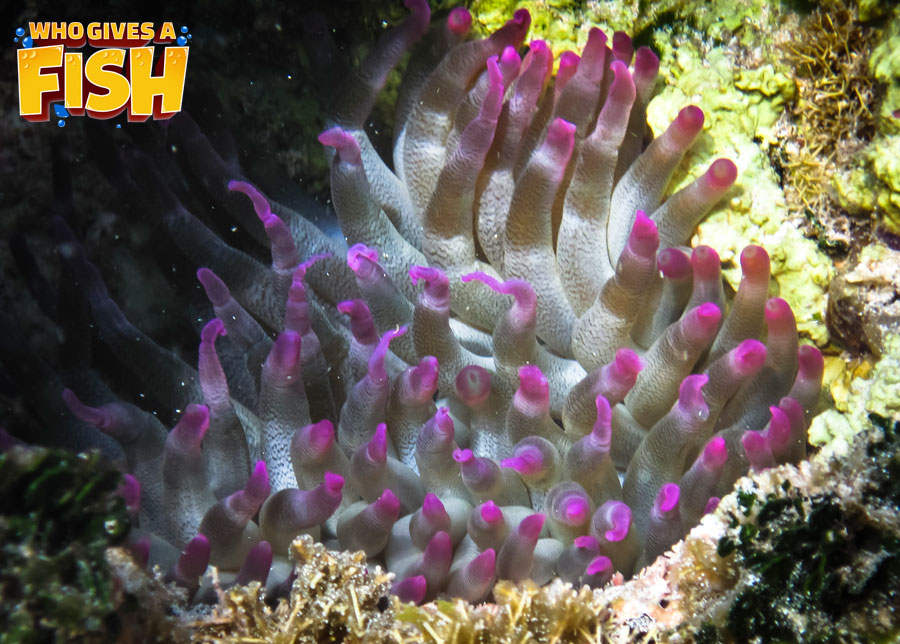 The Condy Anemone is carnivorous but are well developed to utilize other nutritional alternatives. Most of their daily nutrition come from zooxanthellae, symbiotic algae that lives within the anemones tissues.

In your home aquarium you should feed your anemone with chopped mussels, fish and shrimp from your grocery store. A good variety is essential for these anemones as nutrition is derived from many sources of food. Larger anemones should always be fed daily, with medium sized ones getting fed approx. 5 times a week, and young small anemones having between 2-4 feeds a week. The old information that anemones should only be fed once a month is a myth and will result in certain death.

The C. Gigantea anemone has been bred in captivity before. Propagating techniques are not yet known to be successful, but many have been seen to split on their own accord. In the wild, they will reproduce either through fertilization of eggs and sperm or through the fission method.

Anemones in general have the ability to reproduce both sexually and asexually through fission which is when they split themselves in half at the mouth or the foot. This then creates a clone of the original which quickly forms a whole new anemone. They will also reproduce through the use of male and female glands or even find an anemone of the opposite sex. This will eventually result in ciliated larvae being produced, which will fall to the sea bed before developing into a pedal disk which will grow into a whole new anemone.

Condy Anemones are aggressive as they will often move around your tank, stinging everything in their path, including fish. As with all animals, they will compete for the best space, in this case it’s the best spot in the tank so this needs to be taken into account when purchasing one. The only exception to this is when they split, they will be tolerant of their new “twin” and often members of their own species.

Keeping these anemones can be a risky move. Some corals such as the hydrocorals, may be fine but the majority of the time corals will be killed from continuous stinging. If cold water corals are going to be attempted, you should allow the anemones to get settled first. Once they have found a spot and are settled you can try placing new corals far away from them. Even still, these anemones can suddenly start walking and will soon have detrimental affects on other specimens.

Most small fish species will end up being a meal for this anemone, so you need to choose wisely here. Using a C. Gigantea anemone to host Clownfish is very risky, especially as Clownfish are not even found in the Western Atlantic Ocean. If you have a very large tank, keeping cold water fish should be ok. Problems will generally occur when you are trying to house blennies, small gobies and other small cold-water fish. These are often an easy mean when they wander into the very sticky tentacles of a Condy Anemone.

They will often host a variety of commensal shrimp in the wild. They also have an interesting symbiotic relationship with juvenile Cardinal Fish, Apogon spp, the Atlantic Cleaner Shrimp, Periclimenes anthophilus, and the Arrow Crab, Stenorhynchus seticornis. Arrow Crabs and Emerald crabs have been seen to create close relationships with them. If you are keen, try adding these natural symbionts and watch for yourself!