The Firemouth Cichlid, Thorichthys meeki, is one of the hobbies favorite Cichlids. It’s gorgeous coloration and hardiness are two of the main reasons this fish is so popular.

Their teardrop shape make them fantastic swimmers and full sized ones will certainly put your rock work to the test when they decide to break out of their usual calm behavior. They owe their name to the obvious coloration under their throat, which can extend right underneath the fish all the way to the tail.

While this Cichlid can display some aggression, it is generally considered to be peaceful with others. Keeping the Firemouth with other Firemouth and similar Cichlids is a better option for tank aggression planning.

As with most fish, especially Cichlids, their aggression will rise significantly during spawning, especially around the breeding site.

This is another “burrowing Cichlid” in that they will dig out your rockwork and substrate to make themselves a shelter/cave. Don’t count on your aquascaping remaining the way you placed it! You should ensure that any plants you introduce are well anchored down as this fish will likely pull them out.

The Firemouth Cichlid demands at least 30 gallons if kept in a pair, but for any more fish you will need 55 gallons plus. Usual high quality filtration in the form of a sump or canister filters are required to ensure water quality and proper bacterial colonies. This species appreciates areas with good flow and will often play in currents from water outlets.

As previously mentioned, this Cichlid will rearrange your aquascape and you would be best advised to securely fasten all movable objects in your tank and anchor any plants down. Failure to do so will likely result in a completely different look in the morning. Your rock work should include many caves and hiding areas in order to help prevent redecorating.

Like many Cichlids, the Firemouth can tolerate slightly brackish water conditions due to the high mineral and salt content found in its natural habitat. A typical brackish tank, however, is not suitable. 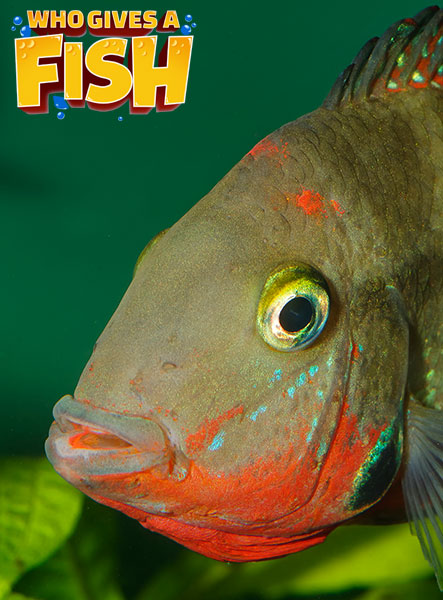 Given their hardiness and ability to adapt to many different types of aquarium setups and water conditions, the Firemouth makes a great fish for any level aquarist.

Like many Cichlids, the Firemouth will give you difficulty in maintaining your aquascape in the way that you originally placed it. This is especially troublesome with full grown specimens and it is highly advised to securely fasten your rock work and to anchor all plants.

Other than spawning times where they can display aggression, they are generally otherwise known as peaceful fish. They do produce a large bioload so ensuring your filtration is nothing but excellent.

These Cichlids are not fussy eaters and will take almost anything you give them. Like all fish, a varied diet is important and the Firemouth will strive off a diet of specific Cichlid Pellet and Flake foods as a base. To supplement these foods, offer slightly cooked cucumber finely chopped, along with dark leafy green such as spinach.

Occasional meaty foods such as animal hearts, livers, brine shrimp and blood worms are encouraged as they will benefit from the proteins. Feed several times per day, and in small amounts. 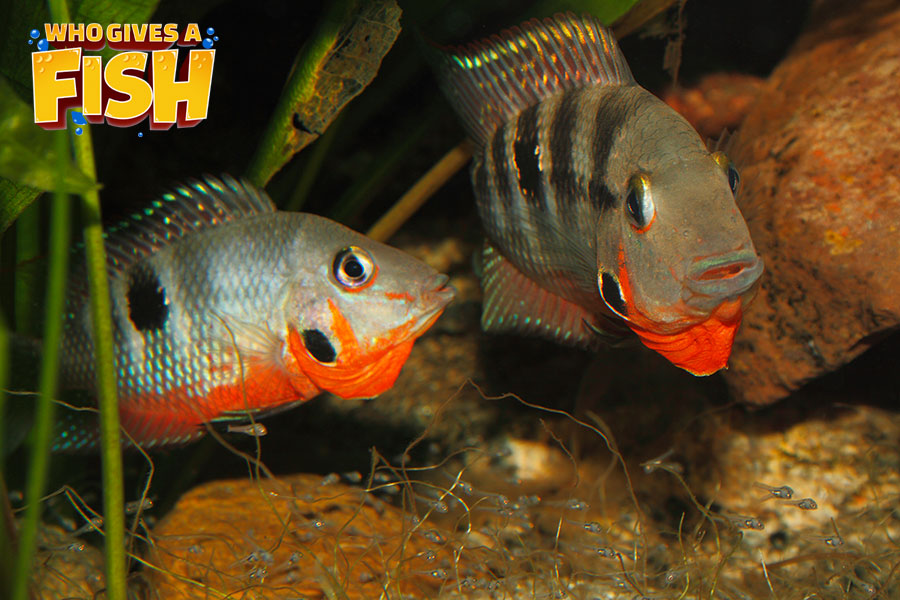 This Cichlid is very easy to breed. The female Firemouth will lay her eggs, where they are fertilized and remain until hatching. Both male and females will remain on guard and closely monitor the eggs which can range in numbers of 100 to as high as 600.

If you are intentionally breeding the Firemouth Cichlid, you would be best to ensure your pH levels are fairly neutral, around 7.0 and that your water hardness is increased to around 10 to 11 dGH. An increase in temperature to around 78° F (25.5° C) will also promote spawning.

Approximately 7 days after being laid, the fry will hatch and become fish food if not removed from a community tank. The adult pair will vigorously try to round them up and keep them together in order to protect them, but stragglers will escape and become food. If you intend to keep the fry, it would be best to raise them in a separate fry tank, and the female can also be placed with them in said tank.

A breeding pair can produce young several times per year.

Firemouth Cichlids are generally peaceful fish except on occasion when spawning and protecting their young. They are suitable for most non aggressive community tanks and do well with their own species.

The pairs are monogamous and will remain as a pair for most of their lives. They will defend their young relentlessly, attacking and killing any fish that persist in harassing the young and/or nest.

While you can keep multiple pairs per tank, it would be advised that at least 50 gallons per pair is met. This should provide ample space to avoid territory problems.