The Hypsypops rubicundus or Garibaldi Fish, is known as brightly orange colored fish with a big personality. As a juvenile, the Garibaldi is a beautiful reddish-orange color turning into a bright orange as an adult. It is one of the brightest Damselfish.

In addition to this the Garibaldi can have bright blue spots sprinkled around its body and over its fins, with blue edging seen in their fins. 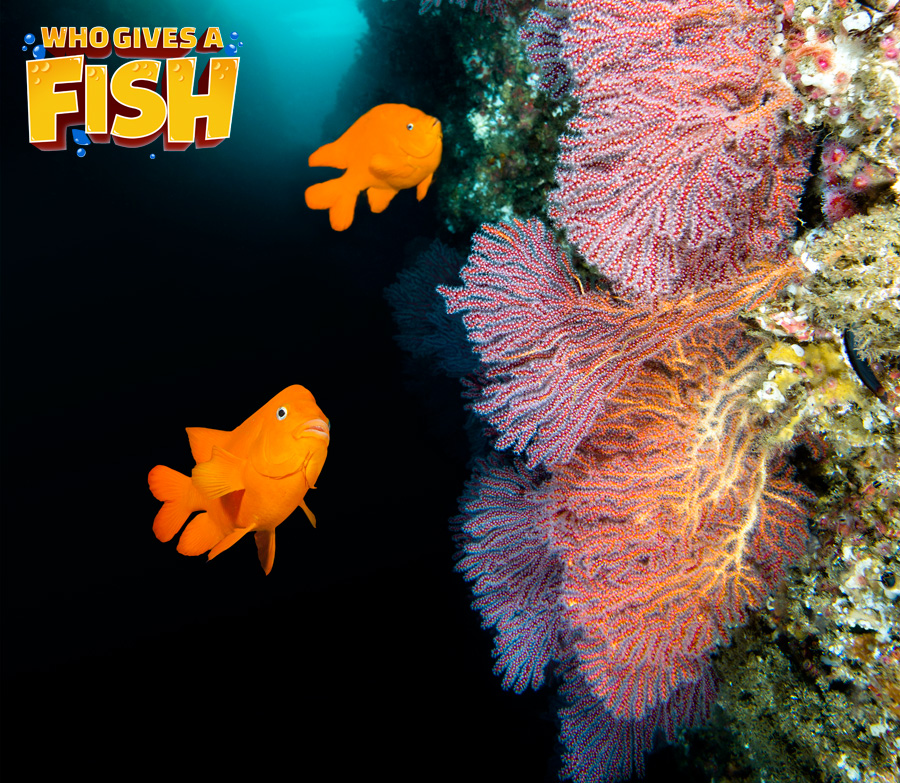 Its fiery color is matched with that of a bold personality, a fish often seen by scuba divers that has little or no fear of them and isn’t afraid to swim up their face masks for a closer look. This is a larger version of Damselfish, often growing up to lengths of 15 inches (38 cm) in length.

The Giant Damselfish, Microspathodon Dorsalis, is the biggest of all, with the Garibaldi Fish coming in close behind as one of the biggest in the Damsel group.

Like most other Damselfish, the Garibaldi is very hardy and generally as easy kept fish in marine tank. Its larger size does mean larger tank volume is required however. Generally, adults are seen in marine shops as juveniles are slightly harder to come across for purchase. These juveniles will be less than .65 inches (200mm) in length. In the State of California, they are the official marine state fish and collecting and holding them is an offense without proper permits being obtained.

As in the other Damselfish species, the Garibaldi is very reef safe and will also do well in a fish only setup. Juveniles are easily cared for, adults however bring with them a more aggressive nature and will use their size to protect their territory. They are known to be quite aggressive to their own species and it is recommended to only house one Garibaldi in your aquarium and to be kept with other larger fish species that share an outgoing persona. Extremely larger setups can allow for more.

The Garibaldi Damselfish can reach almost 15 inches (38cm) long and can weigh up to 2 pounds in the wild! Their physical structure could be described as a bit of “hulk”. In home aquariums however, they are not known to grow past the 12inch (30cm) mark and will live for periods of up to 25 years. Purchasing these fish should be done with a good knowledge of their lifespan and growth potential.

In the adult, the fins and body are seen as completely bright orange. Juveniles with sport a more reddish-orange color with the blue spots around the body, generally located towards the upper body region. Fins will be found with a blue edging and blue dots seen on both caudal and dorsal fins. Young fish will also be seen with blue lines just above the eye and with a light black spot located on the middle of the dorsal fin.

The Garibaldi in the wild

A well-maintained aquarium will ensure a health live for Garibaldi fish. Being a hardy fish, as long as tank size and water volumes are adhered to, the Garibaldi will do well. They are known to be quite active swimmers and can be seen feeding up around the surface of the water. To frequent water changes are not needed – sticking to the regular weekly change of 10% or every other week at 20% are suitable when keeping fish only setups. It is recommended for tanks of 100 gallons or larger that water changes been done of 20%-30% every 6 weeks, with alteration when considering your specific bio load.

Appropriate tank volume is the most important when planning to hold a Garibaldi Damselfish. They are known to be most active during the day time house and not so much at night. The will be seen venturing along the entire length of the tank so heavy rock filled setups are not ideal, but enough to ensure hiding spots for both them and other fish are provided, especially when holding juveniles.

Tank mates need to be chosen appropriately. With bold personalities, the Garibaldi should be housed with similar or larger fish who also have outgoing and aggressive behavior. A fish only tank should be no smaller than 100 gallons (378 liters) to avoid adults of both the Damselfish group and other species from colliding with the glass. If being kept in a tank with corals, be aware that they may harm some soft corals from their movement and may possibly feed on smaller shrimp.

Adequate filtration and at least a slow water current are important. The Garibaldi needs slightly cooler water than most other marine fish. Between 68˚F to 79˚F (20 – 26˚C) will see them remain comfortable and a pH of between 8.0-8.4. These conditions should be considered when choosing other fish to add to the aquarium.

Despite being a hardy fish, they do grow quite large. Like most Damselfish, bigger in size means bigger in personality i.e. more aggression. Juvenile are easy held in marine tanks without too much special consideration needed. Whereas holding an adult requires other parameters, and therefore should be kept by at least intermediate level hobbyists. The rule of thumb for keeping this species is 100 gallons if keeping an adult, and much larger if being housed with other fish.

Other housing requirements for the Garibaldi are much the same as any other fish, with the provision of a wide variety of food, rock work to hide in and ideally stable water conditions. They do share the higher tolerable nature of non-ideal water parameters with other Damselfish, but can still fall victim to disease if they conditions are prolonged. Regular feeds, water changes and selective tank mates will ensure happy and healthy fish.

The Garibaldi Damselfish are omnivorous. In a marine tank the provision of meaty foods and plant-based products should be given as well as the occasional tablet. In the wild, they can be seeding feeding on some algae and sponges, tubeworms, nudibranchs and bryozoans but are never seen feeding on corals.

Ideal feeding schedules are at least 2 small feeds a day with more smaller feeds helping to alleviate any aggression with other fish. If feeding wet foods, be sure to maintain regular water changes to avoid spikes and aim to wet and pellets prior to feeding to avoid air entering fish’s digestive tracts.

A mature Garibaldi swimming around a reef in California

Males will be larger with a visible lobe located on the front of their head. To date, there has been no successful breeding of Garibaldi in captive marine environments. Wild males will maintain a home territory, clearing well sheltered nesting sites where females will eventually place their eggs. Males are quick to fertilize and defend eggs placed in their nests with plenty of aggression. Eggs will hatch in-between 19-21 days. Males have a great reputation for fiercely protecting eggs, showing no fear when it comes to removing and intruders from the area. Divers have reported males to even show aggression towards them when in close proximity to nests.

The Garibaldi Damselfish will do well in both coral and fish only tanks as long as fellow tank mates are selected carefully. A strong innate need to maintain territory will see adults become aggressive towards other fish. It is highly recommended to only house 1 of this species in any tank due to its solitary nature and being classed as a “non-schooling fish”.

Tank mates should not be smaller and less aggressive than the Garibaldi, even when Garibaldi are still juveniles. If they are able to tolerate the ideal cooler temperatures, larger species such as Sea Basses, Parrotfish, Wrasses, Rays, Sharks, Pomacanthus or Holacanthus Angelfishes. Be aware that they may attack small ornamental shrimps like the Peppermint Shrimp.