The Jack Dempsey Cichlid, originates from South America and can grow up to 10 in. (25 cm). It’s coloration can take 12 to 18 months to develop and with the proper diet, is a wonderful looking Cichlid. As you can see in the image below, the Jack Dempsey displays incredible colors. Like many Cichlids, the male usually displays brighter colors and more spots than their female partners.

Jack Dempsey Cichlids have been inter-bred in captivity for many years and breeders have produced some stunning specimens.

Although a very hardy fish, the Jack Dempsey will do best with plenty of tank space and peaceful tank mates. Like many Cichlids, it will burrow and rearrange your substrate. Lighting should be moderate as lights that are too bright will see your Jack Dempsey hiding in caves and under surface plants. As described in more details below regarding feeding, the Jack Dempsey Cichlid will destroy your plants for food, and fun, if not well fed.

They will do well in a community tank but will display aggression when defending their territory / burrow and when breeding. Monitor other tank mates for damage and stress.

It is suggested that you offer a minimum of 60 gallons for this Cichlid as they are messy and require a lot of swimming areas. Keeping more than one also requires more space as they will claim and defend territories and burrows.

They like moderate to strong currents, but be sure to leave a feeding area with calmer flow. The tank needs a lot of rockwork and substrate that can be manipulated. Ensure you secure down any large rocks that may fall or move when the substrate is moved around.

Plants won’t do very well unless you keep the Jack Dempsey well fed and the plants securely anchored. They will be ripped up and eaten otherwise. Keeping your temperatures on the lower side of the scale (approx. 72° F) will help to subdue the aggression. 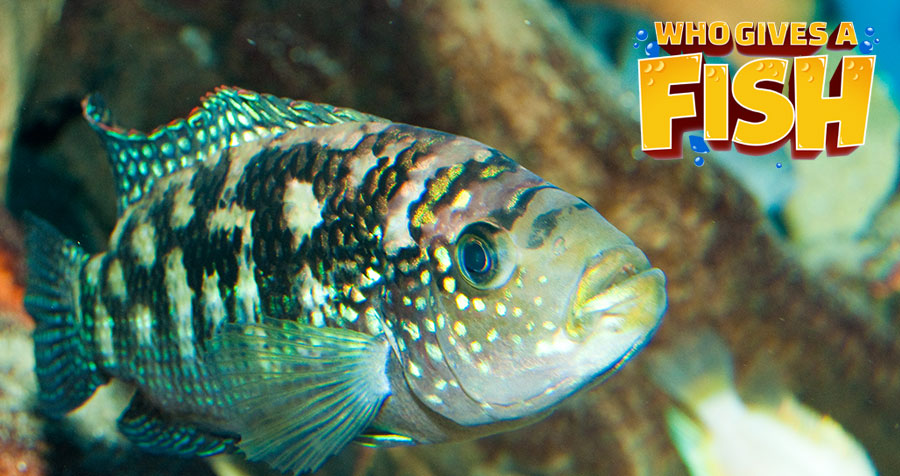 This is a very easy Cichlid to take care of and is exceptionally hardy. It is a common choice for beginners and fish stores are best advised to offer these to beginners over more difficult species. Water quality, while important for the overall aquarium health, can be slightly under maintained and these fish will still strive, however, we recommend keeping your tank well maintained at all times.

If you can spread and manage aggression well, then they can live in a community tank, however, you will need to monitor them closely for any aggression and bullying of other tank mates.

The Jack Dempsey Cichlid will eat most Cichlid specific pellet and flake foods, in addition to fresh and live foods such as worms, shrimp and smaller fish. As with most Cichlids, it is essential that you limit the amount of protein you feed as they are susceptible to digestion problems caused by diets too high in protein and fats. 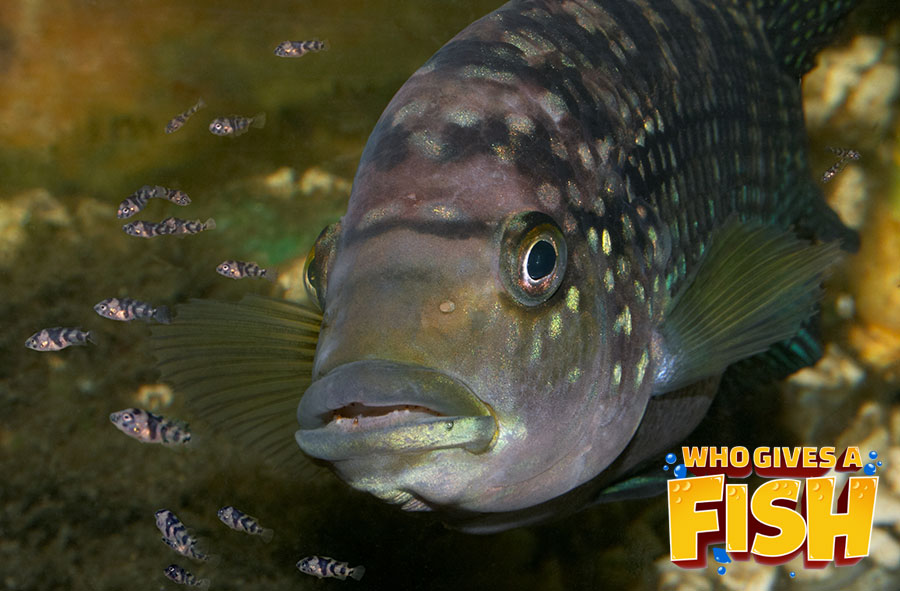 The female Jack Dempsey looking after her fry

Male Jack Dempseys have obvious differences in the dorsal fin. This fin is usually much longer and has more of a point to it than their female partners. Female generally have fewer spots than males, although some inter-bred variations can display more spots than usual.

The widespread availability of the Jack Dempsey Cichlid is owed to the ease of breeding. This is considered one of the easiest Cichlids to breed in captivity. You should, however, prepare for the additional aggression that comes with breeding.

A clean, flat surface will be prepared where the female lays her eggs and the male fertilizes them. They will herd their fry into protected areas in and around burrows and caves, and defend them relentlessly, often attacking any other fish that comes close.

While this Cichlid can be kept with other species, it is generally advised against if you are not an expert at managing tank aggression and have a large enough tank. Like most Cichlids, the Jack Dempsey is very territorial and can become highly aggressive in higher temperatures and during breeding.

As they age, their aggression levels tend to rise and without proper aggression management, you will face growing problems as they get bigger.