Java Moss comes from areas of Southeast Asia, including; Java, Japan, the Philippines, Malaysia, Vietnam, Singapore, and the Islands of the East Indian archipelago. It’s particularly common in moist and tropical climates. Sometimes it can be found growing on rocks, river banks, and tree trunks. This moss is the commonly used in aquariums and is sold in aquarium supply shops, either online or in store.

Java Moss was originally known as Vesicularia Dubyana, but was recently reclassified as Taxiphyllum Barbieri. Several references to the moss still use the vesicularia dubyana classification, and there is still debate over the change.

The debate centers around whether or not Vesiculara dubyana is actually a different species; with the common name Singapore Moss. Even this issue is debated, with people arguing that the two mosses are actually the same thing.

There are elongated, bright green leaves on submerged specimens that are much smaller than the leaves growing on land. Java moss is similar to other mosses in that it has no roots, and instead absorbs nutrients through leaves. The moss grows free floating, or sends out rhizoids that attach it to decorations, rocks, driftwood, gravel, or sand.

This freshwater plant is popularly used as a foreground cover for rocky and sandy substrate, but it will grow on just about anything. It could be attached driftwood, rocks, and even aquarium decorations. It can be used to create incredible carpets. This is done by attaching it to a plastic mesh, and placing the mesh against the aquarium to create a wall, or on the substrate to create a great carpet. The plant can also be attached to mesh to cover unattractive equipment and enhance the beauty of an aquarium.

Attaching the moss to surfaces is a fairly simple process. Start by placing a thin layer of the moss on rock, a decoration, or driftwood. Attach the moss by using cotton thread or fishing line. If you want to create a java moss mat with plastic mesh, put the moss between two pieces of mesh and tying them together using fishing line or thread. The moss will begin to grow between the holes to create a layer of moss you can use in a variety of ways. They have been used by creative aquarists to create balls, cones, and other shapes made from mesh for the moss to grow on. The only limitation there is when it comes to creatively using this moss is your own imagination.

The moss could also be used as a kind of floating plant to give mop spawning fish a place to spawn. Fish such as gouramis and bettas that build their own bubble nests will enjoy having clumps of the plant floating in the tank.

Have some floating – as well as having clumps on the substrate – to give your fish lots of hiding places. A java moss mat is also great for fish that scatter their eggs. The eggs will fall into the moss and be protected from adult fish that could damage them. It’s also a great cover for the juvenile and tiny fry fish in your aquarium. As it matures, it also supports Infusoria growth, which is the ideal food for a newly hatched fry.

The best way to care for Java Moss is by maintaining the quality of the water. Feeding it periodically with liquid fertilizer promotes growth and keeps it healthy as well. The moss on the bottom of the tank can collect debris, which could damage the plant if left unchecked. Clean the moss by taking it out of the tank and using water to rinse it out. There’s no need to worry about being too rough with the moss as it is sturdy.

There is one major health problem that your java moss can suffer from, and that is algae. If algae builds up in the moss and grows on it, it can be impossible to get rid of. Rather than getting rid of the algae, you will have no choice but to get rid of the moss. Discourage algae growth by keeping light levels down and the water clean. High amounts of phosphates and nitrates, which build up as a result of dirty water, also encourage the growth of algae. 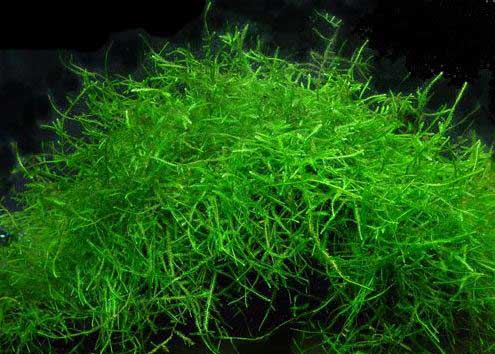 This particular moss is considered to be a slow-medium grower. It propagates through division, meaning that all you have to do to grow new moss is take a piece from the main plant and put it where you want the new moss to grow. The moss will attach to a surface with rhizoids, which are similar to roots. The rhizoids don’t absorb nutrients like roots however. All they do is keep the plant attached to the object. Nutrients are absorbed through the entire plant by the stems and leaves.

Java Moss generally grows slowly, however this growth can be encouraged with increased lighting and liquid fertilizers. Increasing the temperature of the water slows down moss growth. The moss will grow vertically and horizontally in rows, creating thick and dense tufts of heavy growth. The moss should be trimmed as it grows to keep it in good shape and encourage additional growth. The pieces you trim can be placed elsewhere to start a new patch of moss.