The Mystery Wrasse, who is also known as the Whitebarred Wrasse is quite obviously different from any other lined wrasse. As seen in the other Wrasses, it doesn’t have the horizontal lines that many are known for. The Mystery wrasse has slight vertical white bars that will continue to get thinner as the fish matures often fading completely once they reach adulthood. 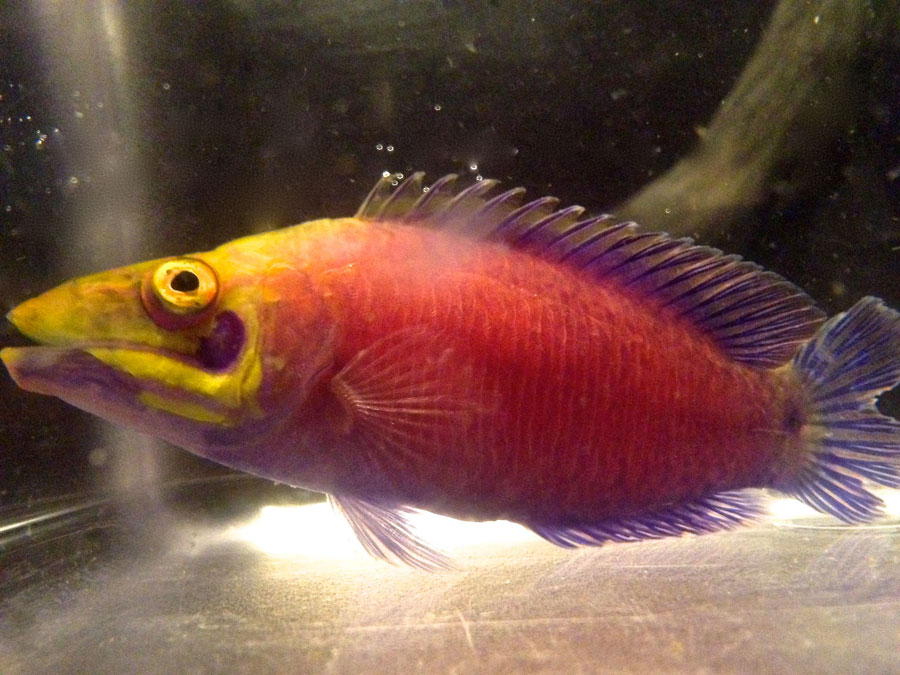 This Wrasse has been known to scientists and divers for many years but has only recently been seen in the home aquarium. There isn’t a huge amount of data collected on this wrasse to date but being so different from other lined wrasses it’s safe to say most of them will be expensive to purchase.

This odd looking Wrasse has many admiral features that make it a nice addition for your home aquarium. It comes with beautiful coloring, it is a hard fish and so far, recorded as being easy to care for. It”s known to be very compatible with other marine species including inverts. They are a small fish but can be observed to be quite competitive with feeds and great at consuming the likes of bristle worms, snails and commensal flatworms.

The Mystery Wrasse is diurnal which will see them being active in the day and sleeping at night. Darker areas of the wild reef are where you will find these wrasses as they prefer to be hidden away. Unlike other wrasses, they will not use the sand bed to dive into if they feel threatened and will use a cocoon to sleep in if protection is needed.

They are known to be very shy fish in the wild, however hobbyists have reported these fish being quite confident once they are adapted to the home environment. They are mostly passive fish and will get on well with others but can be known to protect their territory against newly added fish. It is recommended to keep them with larger and more aggressive fish and making a lined wrasse the final addition to your tank. It should be noted that they do not house well with other lined wrasses.

The Mystery Wrasse has been rated as an easy fish to keep. Like most fish, they are known to suffer during the transportation period and get stress related injuries and illnesses. They can be seen to produce excess slime during this time which in turn causes problems with respiration. This is another thing to watch for when purchasing this fish, if it has excessive mucous, it is most likely being affected by an illness or parasite. Ensure your chosen fish is moving freely and eating foods supplied by the seller.

These Mystery Wrasses are carnivores, feeding mostly on things like fish eggs, sea urchins, mollusks, crabs and other bottom-dwelling crustaceans. Ensure you provide them with a variety of rich foods full of protein, formulas and flakes that concentrate on small crustaceans. Ensure to feed them daily, and if you have a well-established tank with plenty of natural foods, you can feed every other day. Like all Wrasses, they will benefit greatly from a tank with plenty of mature rock that provides the small fauna they enjoy.

Like all the Wrasses in the genus, the Mystery Wrasse can be seen feeding on Pyramidellid snails, the parasitic worms found on Tridacna Clams. These very small snails are nocturnal as they spend most the day hiding in the base or between the scutes of clam. As the Wrasse is diurnal the chances of them getting to eat them will be slim but can still happen. It is still unknown if they Mystery Wrasse follows the habits of others in the genus of picking parasites of larger fish.

Males will show a lot more intense coloring during mating, as seen in other lined Wrasses. Like many marine fish, at the time of writing, they have never been successfully bred in captivity.

The Mystery Wrasse should be housed alone, and this genus is not known for doing well with other lined wrasses. For the most part they are considered reef safe but due to their feeding habits they can be known as “predator” reef safe or can be kept in a fish only tank. They will become passive and peaceful additions to a community, even with other wrasses. Lined-wrasses will become more aggressive and protective of their territories and the Mystery Wrasse is no different, as they will ward off new tank mates. They have also been known to take bites out of ornamental shrimp that are added after they have established their home.

It is best to avoid adding shrimp, crabs, small urchins, smaller fish and gastropods as these will be quickly eaten by wrasses. Lined wrasses may be picked on by larger fish like Triggerfish, Hawkfish and Dottybacks so these are not great tank mates.

Predator fish like Scorpion Fish, Lionfish and Groupers will make a quick meal out of a line wrasse so ensure they are never in the same tank.