With almost 400 species found in the Acropora species, there is only 3 found in the Atlantic Ocean. The Staghorn Coral, Acropora Cervicornis is one of those 3. They are a dominant coral and one of two species of Caribbean Acroporas.

The Staghorn Coral has a slight variation in appearance in the Acropora genus. Its branches are spaced more loosely with a more relaxed look to them. This is a big help for this Acropora as they require such good water flow between their branches to maintain good health. This make them a bit easier to look after as well as there is less chance of debris building up on them. 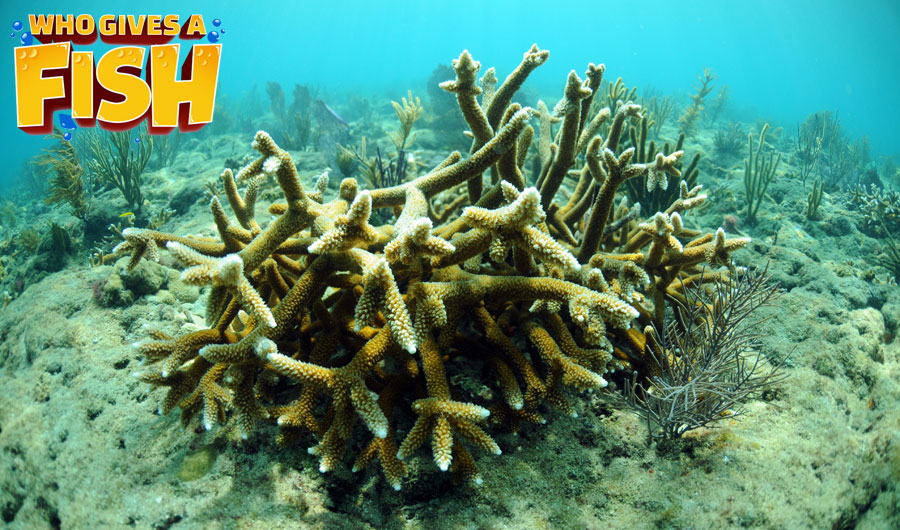 The Staghorn Coral has a big job to do in the wild as it plays a big part in the building of the reef structure. Unfortunately, in the past 30 years their population has decreased by over 80%, so they have been listed as critically endangered. This is mostly due to being hit with disease, human interference and climate change.

Their population appears to be stable today, and some of the reefs are being rebuilt. However, this progress is slow as there has been an increase in the population of urchins and other species that hinder their growth.

The Staghorn Coral has been propagated in captivity, which will help to support wild populations in the Atlantic Reefs. It is currently illegal to remove any of these corals from the wild for commercial use within US waters. Aquarists are encouraged to purchase Staghorn Corals that have been grown in captivity, not only helping their wild status but these specimens seem to be more hardy than their wild counterparts.

All Acropora corals have very lightweight and porous skeletons. The Staghorn Coral will grow in a branching structure where each branchlet forms a “Y” at right angles. Unlike the A.Prolifera, it is not compact but open and loosely placed. Their bottom parts (basal) are usually dead. They have very dense bases, with the Staghorn Coral known to have the densest skeletal bases ever found in any of the stony corals. They have rounded cylinder shaped branches that can grow from between 3 feet (1 m) to 6 feet (2 m) when placed in ideal conditions. They will send out tentacles at night and take on water to increase their girth.

The Staghorn Coral comes in either gold, brown or yellow coloring. It is said that Acroporas that have thicker branches seem to be harder to care for than those with thin ones. Hobbyists have also reported that brown specimens tend to do better than colored ones.

Acroporas are known to be fast growing with terminal (or axial) polyps located at the end of their branches. These polyps will secrete corallite which will see constant growth in a cluster shape. These polyps will not be found with zooxanthellae on them. Fast grow is allowed as the terminal polyps are fed by the rest of the colony, which will generally see the Acroporas outgrowing other corals in the reef.

A Staghorn Coral has the potential to grow up to 6 feet (2 m) when living in optimal conditions. They will sexually mature between 3-5 years with possible branch diameters between 1.5 – 2.75” (4 – 7 cms). They have a life expectancy of between 4 – 7 years.

The standard live rock/reef setup is what is required to house the Staghorn Coral. The presence of fish will also be beneficial with some organic waste being created for them. It is recommended that a mature tank of over 1 year old is required before adding any Acropora species. 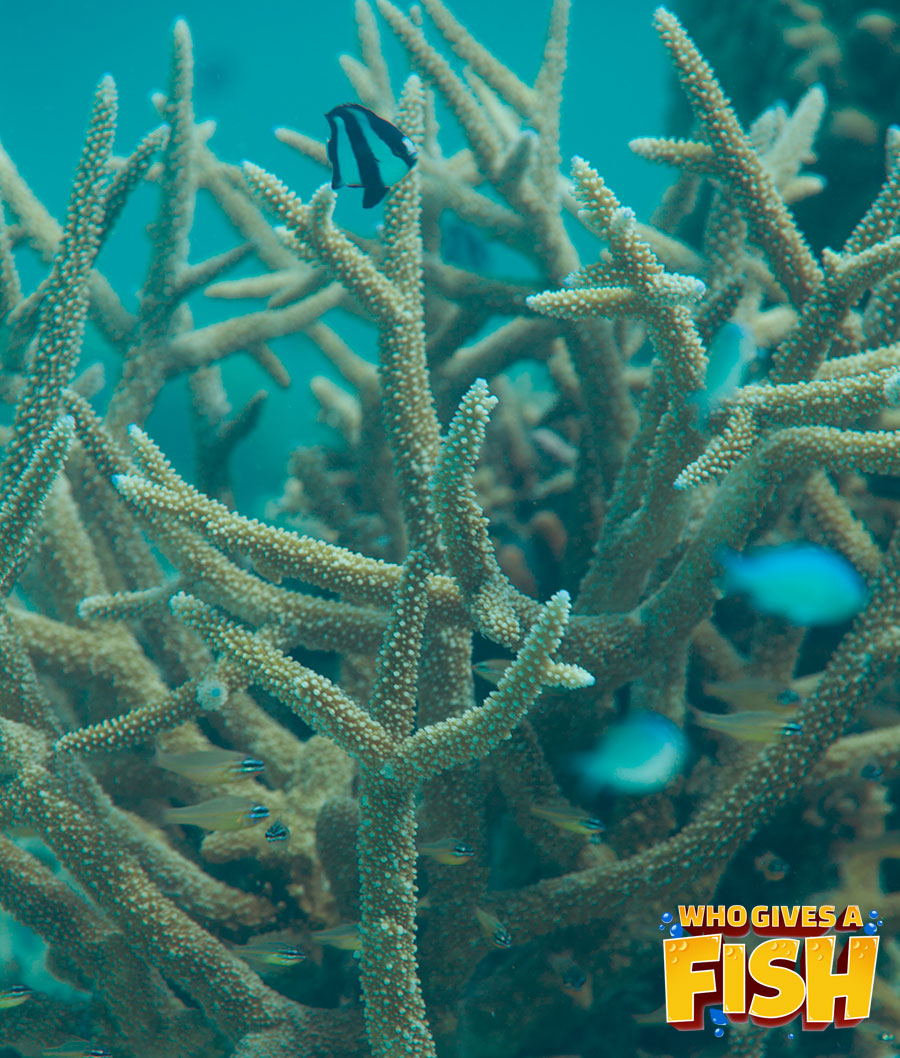 Acroporas are without a doubt one of the more challenging corals to look after, despite their natural conditions being so variant. In a home aquarium, they need very stable conditions with any sudden and large changes resulting in quick deaths. They are very sensitive to fluctuating temperatures, any sediment in the water, chemical changes and other things that will stress them. Conditions that will cause stress are things such lighting that is too weak, poor water flow and changes in chemistry.

Acropora need to be slowly and carefully acclimatized to their new tanks and need to be placed in the position they are going to be permanently kept in from the start. The Staghorn Coral will need about 5-6 months to regain any normal growth rates once they have been added to an aquarium. Moving Acroporas around too much will cause stress and the eventual death of them.

There are occasions where a perfectly healthy tank has a new Accropora added to it and suddenly all others die as a result of polyp bail out or RTN (Rapid Tissue Degeneration). Entire tanks or Acroporas have been killed off within hours. Science has still to answer why this happens, but it is recommended to get all the Acroporas that you intend to keep and add them when they are young.

The recommended choice is to feed zooplankton once a week. Nauplii, Artemia and Copepods are too big for them to ingest. Some new forms of food are being developed like larvae from invertebrates and some new rotifer strains. Many experienced hobbyists feel that Acroporas need to be kept in tanks that have dissolved or solid organic matter in order for them to have a healthy life. In the absence of these, they seem to do well for a matter of months but suddenly decline rapidly from starvation. Lack of new growth, no polyp extension and tissue recession are typical signs of a lack of food.

Acroporas are well known for having extremely fast growth rates, some of the fastest in the stony corals. They will sexually mature between 3-5 years with possible branch diameters between 1.5-2.75” (4-7cms). They have a life expectancy of between 4-7 years. They will break easily and form new colonies from these fragments. This is why they are very easily bred/propagated in captivity.

The Staghorn coral are male and females and will reproduce both sexually and asexually. In the wild they will reproduce sexually by releasing sperm and eggs into the water, resulting in the eggs being fertilized which turn into free-swimming planula larva. These will eventually settle in a new area on some substrate, becoming plankters. These will then form tiny polyps that will excrete calcium carbonate as it develops into a coral. Unfortunately, Planula larvae are very vulnerable to predation and only few of these ends up surviving. They also have the ability to reproduce asexually. At the tips of the branches, polyps will secrete corallite around itself with will see the branches grow longer. They will also form new colonies as fragments will break off during storms, floating away and eventually forming new corals.

Propagation of Acroporas is quite simple. You will need to begin with choosing a healthy coral that is not currently showing any signs of stress or illness. To start, simply cut a long piece that is at least 2” long and attach that to a piece of rock or plug using 2-part epoxy or underwater putty. A tip for this, is to not glue these frags upright as they are known to grow a lot faster on their sides. When these corals are fragged, they will exude a slime which should not ever come into contact with any other corals and its always highly recommended to wear gloves when doing this. Ensure that any new frags are given plenty of water flow for recovery.

Acroporas are peaceful corals but you need to be mindful with crabs. Experienced hobbyists highly recommend to never keep crabs in a tank that has Acroporas in it. Crabs are known as opportunistic feeders with the only exceptions being some symbiotic crabs such as gall crabs and commensal crabs.

It is recommended that Acroporas should be kept in thanks with other SPS corals and only SPS corals. They have the ability to send out “acontia” which are digestive strands, used to digest other corals- so keep a close watch for any problems. You will be able to get away with housing them with other types of corals if your system is well equipped with a very high level of filtration. Acroporas will need to be at least 10” away from other corals such as LPS corals, Zoanthids and invertebrates.

Soft Leather Corals should not be kept with any of your Acroporas as they are aggressive corals that will release terpins which will kill your precious SPS corals. Leather corals are harmful to Acroporas even when kept in well filtrated systems. Some LPS corals will also send out long feeder tentacles at night which will quickly kill your Acropora if touched. Take plenty of care if you are making the decision to have a mixed coral reef setup.