The Tiger barb is one of many barb species that are generally kept by freshwater aquarists. Around 2.6 million fish where imported to the United States in 1992, which made the Tiger Barb 10th on the list of the most commonly imported ornamental fish species.

You can typically find many different captive bred hybrids in the aquarium trade. These hybrids are generally bred for their color, and as such, sold as Green Tiger Barbs, Albino Tiger Barbs and Gold Tiger Barbs. The Green variety has a green color due to the so called Tyndall effect. 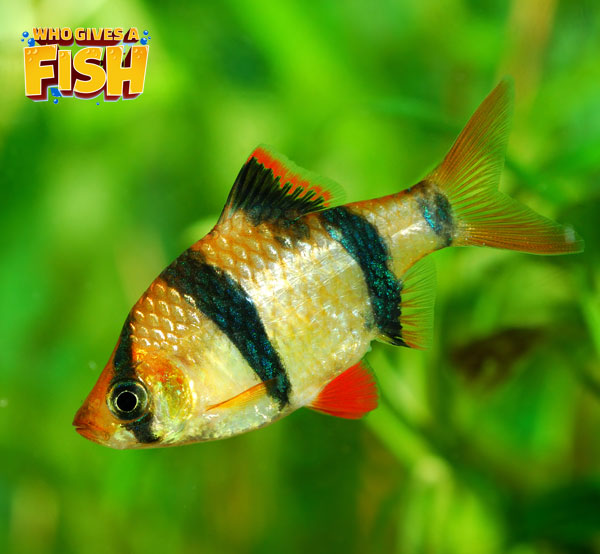 Puntius tetrazona belongs to the genus Puntius in the family Cyprinidae (Also known as the minnow family).

The Tiger barb has been referred to under many different scientific names, including Capoeta tetrazona, Barbus tetrazona, Barbodes tetrazona and Capoeta sumatruas. Pieter Bleeker, a German ichthyologist discovered the fish in 1855 and called it Barbus tetrazona. A few years later, Bleeker described a different species under the same scientific name. Bleeker furthered the confusion in 1860, by using the name Capoeta sumatraus for the first discovered fish, the Tiger barb. These mistakes were not detected until the late 1930’s.

The fishes nomenclature was then changed, and the Tiger barb was given its original scientific name, the Barbus tetrazona. In the last few years, Dr L.P. Schultz, an ichthyologist, reclassified the entire barb group by arranging them based on the number of barbers owned by each species.

The appropriate classification is still under debate however. Zakaria-ismail, another Ichthyologist, has recently said that according to his continuing osteological research that have been classified under Puntius, it is impossible to clearly define the genus named Barbodes.

Tiger barbs derive from South-East Asia and are indigenous to Malaysia and Indonesia. They live on the Island of Borneo, the island of Sumatra and the Malay Peninsula. Sometimes specimens have been reported from Cambodia, but these sightings have not been verified. As it is a favored aquarium fish, freshwater Tiger barbs have been imported to many countries by man. You can for find it in Colombia, Australia, Suriname and Singapore. This makes it difficult to know if freshwater Tiger barbs spotted in other Asian countries other than Malaysia and Indonesia are small, indigenous populations or are from fish that have been freshly introduced by man.

The Tiger is a benthopelagic species usually found in turbid or clear water. The classic environment is a medium-fast and shallow stream in the tropics where the water temperature is fairly high. Freshwater Tiger barbs have also been found in swampy lakes where the water level varies a lot. These types of fluctuations is usually associated with varying water quality as well, and the wild Tiger barb might be more receptive to changing water quality than what was previously thought.

Try to emulate a natural environment when you first set up the aquarium. The shoal should be given enough of room for swimming, but make sure to include hiding spots. Ideally keep the aquarium well planted, and include driftwood and rocks.

The Tiger barb is known to adapt to a pH range between 6.0 and 8.0 and a dH range between 5 and 19. It will do best in comfortable and somewhat acidic water, so it is highly recommended to keep the pH in the 6.0-7.0 range and the dH below 10. In aquariums, Tiger barbs are usually kept in a dH as low as 4. Attempt to keep the water temperature in the upper-most part of the suggested range, ideally 74-79° F (23 – 26° C) 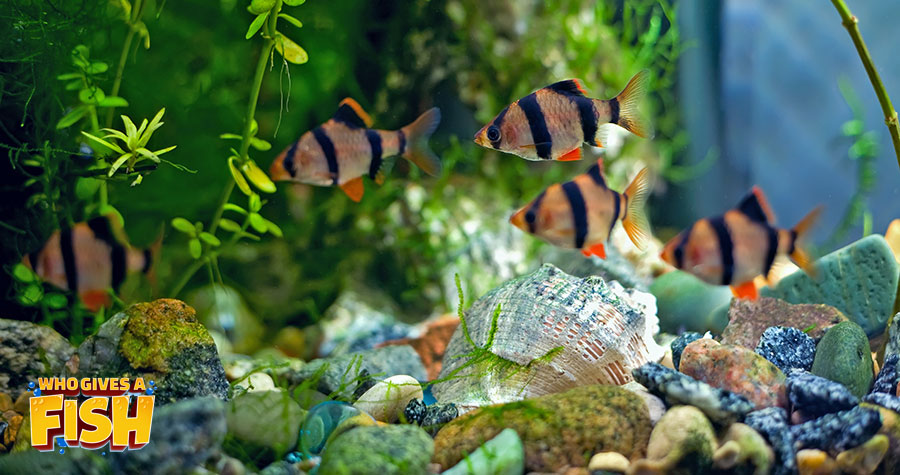 The Albino Tiger barb is beloved by a lot of aquarists and snubbed by others. Albinism is a genetic condition caused by a distinct consolidation of recessive alleles in the DNA of the fish. The Albino Tiger barb must gain this trait from both parents to become an albino fish.

The Green Tiger barb is also known as the Moss barb or Moss-banded barb. It is a captive bred color transformation of the wild Tiger barb. The Green tiger barb is favored among aquarists as it displays an alluring green-blue coloration or a deep fluorescent color.

The Green variety is very melanistic and echoes this green shade over its black due to an anomaly known as the Tyndall effect. These barbs will shoal with Albino Tiger barbs and normal Tiger barbs. The recommendations for care for is the same as for the normal variety.

The Tiger barb is easy enough to look after provided to you a clean aquarium. The difficulty may arise when overcrowding your tank and not managing aggression accordingly. Bigger schools will help spread aggression, but ensure you have the space to accomodate this and indeed, their future growth. 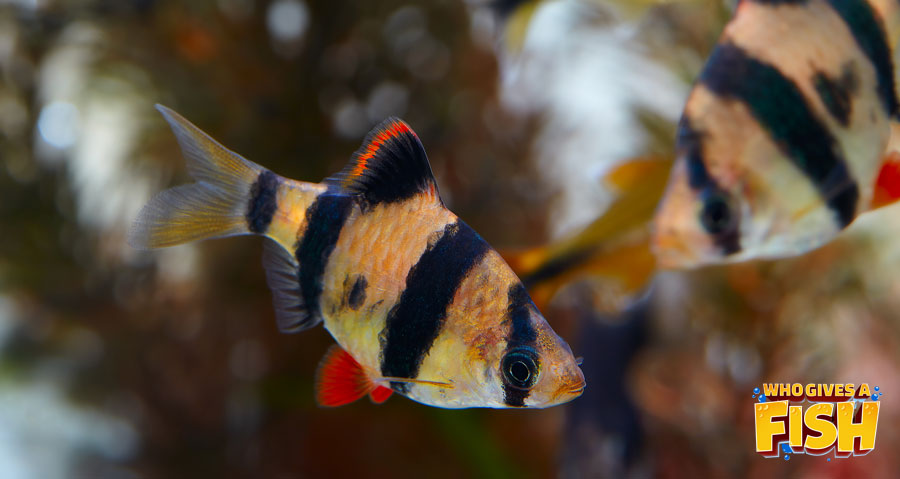 The Tiger barb is an omnivore and in the wild feed on small crustaceans, plant matter and worms. It is important that you provide your barbs with a varied diet that consists of vegetables as well as meaty foods. A high-quality flake food for tropical fish can be used as the base. Supplement with live or frozen foods, e.g. bloodworms and brine shrimps. They will also take lettuce and boiled zucchini. 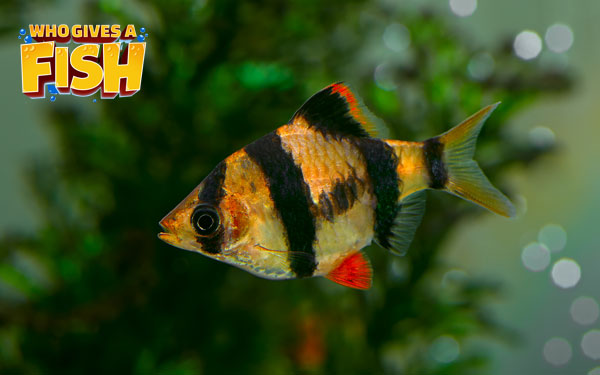 The female is usually bigger and the male often develops a red coloration on his nose.

In the wild, they are very creative and the population doubling time for this species is under 15 months. They generally become sexually mature once they reache a length of up to 0.8-1.2 inches (3 centimeters), and this will usually happen when the fish is around seven weeks of age.

It is not very difficult to sex the Tiger Barb, as the female is bigger than the male and has a more rounded belly. The male has a peculiar red nose and above the black part of the dorsal fin you can see a distinctive red line. The dorsal fin of the female is mostly black.

If you want to breed these barbs in captivity, the preferred method is to keep a shoal of them together and let them create their own pairs. It is usually a good idea to set up an independent breeding aquarium, as Tiger barbs are known to eat their own eggs, as well as eggs laid by other fish. Removing the adult fish after spawning is therefore highly recommended.

These barbs can be semi-aggressive. They do best when kept in a school of 6 or more. Getting only of few of them will most likely bring out their fin nipping and aggressive behavior. You should avoid keeping these with fish that are long-finned and slow moving, as they will most likely not do well with this fish.