The Yellow Tang fish, also known as the Yellow Sailfin Tang fish, is the best bet for newbie marine enthusiasts looking to buy and enjoy owning a tang fish.

The Yellow Tang is not just the most popular tang there is in the world; it’s among the ten most popular aquarium species as a whole. People are drawn to the bright color, hardiness, and relative low cost of the yellow tang.

These are long lived and slow growing fish, meaning that you can enjoy them for many years. The average life span of the aquarium yellow tang is between 5 and 10 years. The yellow tang is similar to the rest of the sailfin tang fish in that it is roughly as long as it is high when it extends its fins. This gives the yellow tang a distinct disk-shaped appearance. If you keep your yellow tang happy then it should be active all day. Healthy yellow tangs are also naturally curious about you and their new home.

A yellow tang fish would be a great addition to any marine aquarium. They are able to get along quite well with a community aquarium. The sailfin is a relatively peaceful fish and it should have little problem integrating well with a variety of tankmates.

The only thing to keep in mind is that it does not get on very well with other tang fish. As such you should only keep one tang in an aquarium. The only exception to this rule is if the tang is introduced to other fish when young. In this case they can sometimes grow up to get along fine. Tangs are naturally bold and they are able to quickly adapt to the aquarium they are placed in. They also require relatively little care. The yellow tang fish is hardy and can resist diseases if kept in a good quality environment. It also responds to treatment well should it get sick.

Zebrasoma fish species have some things in common with tangs and surgeonfish. All three fish enjoy living in an aquarium with plenty of water movement to provide them with plenty of oxygen over a more placid aquarium. They are also all quick and agile swimmers, which means that they need plenty of room to swim in and crevices in the corals/rocks so they have a comfortable place to sleep at night and hide if they need to. Because tangs mostly eat algae you can give them most of their nutritional needs by keeping an aquarium with good algae growth. This also means that they would fit in well in a reef environment.

Every member of the surgeonfish/tang family is a powerful swimmer and so they need plenty of open space. They also need rocks and corals with plenty of nooks and crannies that they can hide in to stay safe and sleep at night. They shouldn’t bother any corals or invertebrates you have but they will graze on algae, making a reef environment ideal for them. You should glue down any corals in their tanks however. They swim so quickly that they could topple corals. Tangs thrive in a tank with plenty of algae growth.

You shouldn’t need to change the water in their aquariums too much. The ordinary method of changing 10% of the water once a fortnight and 20% once a month should be fine. The aquarium tank that you get for your fish needs to be at least 100 gallons. Tangs are naturally found in sunny areas. You can keep them at regular light levels if you wish or you can turn up the lights. If you do this you should ensure they have shaded areas if they need them. Because the yellow tang lives in tropical waters the water temperature should be kept between 75°F – 80°F (24°C – 27°C). Surgeonfish and tangs alike thrive best in an environment with plenty of water movement. They need lots of oxygen and enjoy the feeling of having water rushing over their gills. You need to have at least one area of the tank have strong movement. They typically spend their day swimming around the tank darting into and out of corals as they see fit. During the night the will swim into crevices to sleep. 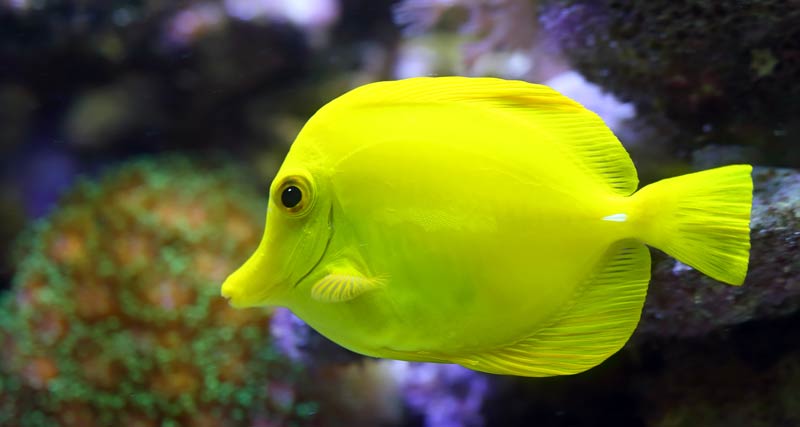 Yellow tang fish are ideal for an aquarium because they are tough and easy to keep. They can make it through just about anything a marine environment can throw at them except poor quality of water. No matter what though they do their best in a consistent environment. This consistency needs to spread to the décor and their tankmates, as well as the quality of the water. You can keep your tang in a fish only tank or in a reef environment as it shouldn’t pose a danger to invertebrates or corals. Tangs are highly resistant to disease and will respond well to treatment if they fall ill.

There are some members of the Acanthuridae family that are more delicate and need specific care, but many of them will do just fine if you use the right technology. All breeds of surgeonfish need to be kept in a well aerated aquarium. Creating a strong current should give your fish the oxygenation they want. Give them plenty of space, especially adult yellow tangs. Make sure they have plenty of rocks/corals that they can hide and sleep in. You should use décor that promotes the growth of algae as surgeonfish enjoy grazing on algae, making it a perfect addition to the reef environment.

Surgeonfish and tangs alike are continuous feeders. It’s important that you give them a proper diet. They may be resistant to disease but they are still susceptible to nutritional disorders. These disorders can cause them to lose their color or suffer from LLD (lateral line disease). You can help them avoid these problems, as well as take care of any that occur, by ensuring your fish get plenty of vitamin C. Either supplement it into their diet or add a supplement directly to their water. Tangs are also susceptible to bacteria that are caused by an organic buildup. This can damage the water quality. You should use a quality filtration system on your tank and occasionally protein skim and change small amounts of the water.

The yellow tang fish is primarily a herbivore. They will typically feed on filamentous algae in the wild. They get it by scraping it from hard surfaces. This genus is capable of storing fat in their so that they can survive for a period without food.

They will also primarily eat vegetable matter in an aquarium, but they should be provided with some meaty foods. You should feed your yellow tang plenty of marine algae, along with algae and spirulina prepared frozen formulas. They also eat frozen brine and mysis shrimp and flake foods. You could feed them Japanese Nori and other seaweeds by using a vegetable clip to attach it to the glass of the aquarium. They will also greatly appreciate having a live rock with micro and macro organisms. It’s also a good idea to culture macro algae yourself such as chaetomorpha. Feed your yellow tang three small meals spread across the day rather than one large meal. Tangs graze continuously throughout the day so it’s healthier for your fish and the water they live in to be fed this way.

Providing your tang with a vitamin supplement such as vitamin C can help to give them all the nutrition they need. Vitamin C also helps in the fight against lateral line Erosion (LLE). You can give them a vitamin supplement by soaking their dried pellets in liquid vitamins, adding vitamins to their food, or putting a liquid vitamin in their water. Some people believe that you can ward away Marine ich by soaking their food pellets in garlic. Some hobbyists say that they have managed to get their tangs to eat supplemental foods; you should be able to get your tang to eat pre-boiled or frozen zucchini, broccoli, spinach, and leaf lettuce.

There are no noticeable differences between the sexes. The only potential difference is that females tend to be smaller than males. While there have been reports of surgeonfish spawning in public aquariums and home aquariums, there are no reports of regular spawning or rearing the young. Even though the yellow tang has yet to be bred in captivity they are seen in breeding pairs and groups in the ocean. When they spawn in pairs the males will defend their territory while attempting to attract the females that pass by them.

The Yellow Tang will get along fine with inverts and corals in a reef environment. You could also keep them in a fish-only tank if you place them with peaceful tank mates. Yellow tang fish are mild tempered and can get along with most fish. The only fish they really disagree with are members of their own genus. As mentioned earlier the exception is that they can be kept with other tangs as long as they are introduced when young.

Surgeonfish and tangs can both get quite territorial at times. Sometimes they will fight with members of their own kind but sometimes they can fight other species too. It is often a problem to introduce a surgeonfish to a tank that already contains surgeonfish. It helps to introduce all the fish together rather than adding another one at a later date. While you can avoid some of these problems with a large aquarium you should keep in mind the social behavior of the other fish you are thinking about putting with your surgeonfish.

You can successfully pair the yellow tang up with different genus of fish as long as there aren’t any similarities between the fish. For example you should be able to mix a Naso Tang, Yellow Tang and a Hippo Tang as long as you introduce them all together. You can also cut down on any aggression towards a new fish by changing the rock work. They might be chased around but it shouldn’t escalate into something serious.