The Cherry Barb has an elongated and torpedo shaped body with forked caudal fin. Dorsal side of the body is fawn colored with a slight greenish sheen. Sides of the body and belly have gleaming silver highlights. A horizontal stripe is present which extends from the tip of the snout through the eye to the base of the caudal fin and it is brown or blue-black with a metallic edge that turns to blue or sea green toward the tail. 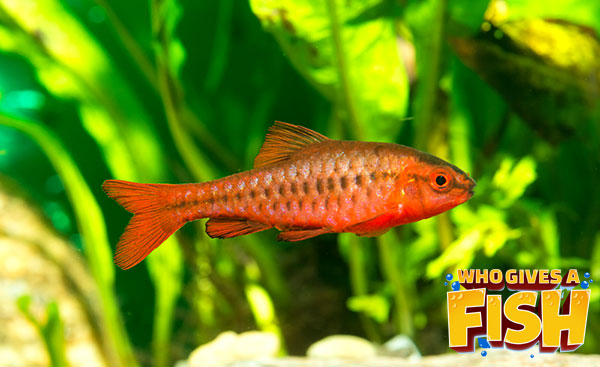 The male is redder than the female which becomes deep red during breeding season while the female is lighter with yellowish fins. It grows up to 5 cm in length and lives up to 7 years.

Overall, the cherry barb is an excellent community fish which makes an attractive addition to any tank.

The Cherry Barb is an extremely favoured fish among aquarium hobbyists. It is placid in nature and easy to care for in captivity. The cherry barb is a schooling fish, and is best kept in groups of more than 5. The tank should have heavy vegetation and floating plants with a dark underlying layer, and plenty of open space for swimming. A competent filter and good water movement are also needed for the male cherry to progress their coloration. The younger male is usually placid, but a mature male can be combative when breeding.

The red cherry barbs can be kept with many of the most favoured fish, including tetras, rainbowfishes, livebearers, anabantoids, catfishes, loaches and other small cyprinids. Aquariums are closed systems and always needs maintenance. Nitrates, organic matter and phosphate build up overtime in the aquarium, and the water hardness can increase due to evaporation. Appropriate care should be taken, and 25-50% of the tank water should be replaced at least once a month. If the tank is heavily stocked, then 20-25% of the water will need to be replaced weekly, or every other week. 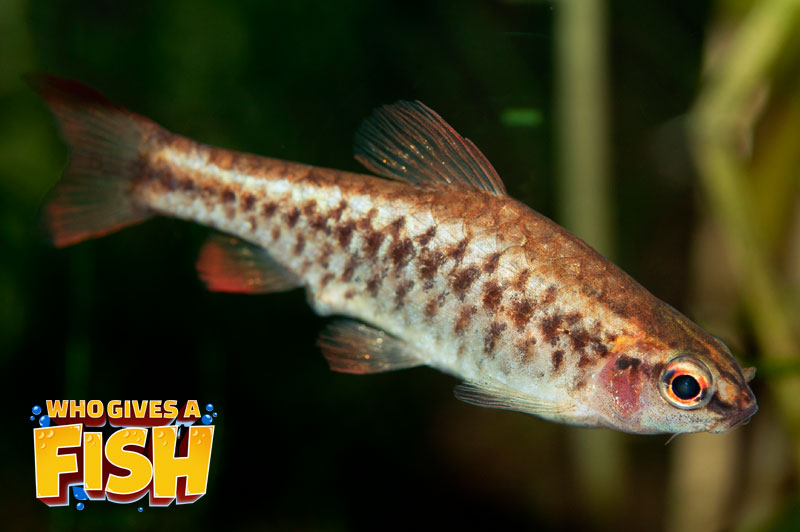 The Red Cherry barb is an omnivore, and in the wild it primarily feeds on algae, diatoms, small insects, worms, crustaceans, organic detritus and other zooplankton. In captivity, it usually welcomes all sorts of live and frozen foods such as Dahphnia, bloodworms and Artemia, alongside good quality flake and fresh foods. To keep your cherry in good health, a high quality flake food should be supplied at least 2-3 times a day.

It is very hard to distinguish the differences between male and female cherry barbs at a young stage. But at the adult stage, the male barb becomes redder and slimmer, while the female is of a much lighter colour, generally with some yellow, and a light orange or black horizontal band, and has rather chunkier body with redder gills than the male.

The male cherry barb turns a bright red colour during spawning season, which is most likely where they get their name from.

The Cherry Barb is an egg layer, and can be bred very easily in an aquarium. They spawn in areas with heavy vegetation to deposit their eggs. A separate breeding tank should be set up during spawning time, and it should be lightly lit with clusters of Java moss. The water density should range from 10 to 12° dGH with slight acidic pH (6.0 – 6.5) and the water temperature should vary between 74 and 79° F during breeding time. The female lays 200 to 300 eggs, and distributes them on plants and on the underlying layer.

The eggs take around 24 hours to hatch. The fry are free-swimming after two days. After five weeks, the hatchlings reach around 1 cm in length, and they are easily detectable as cherry barbs. Free swimming fry should be fed with newly hatched baby brine, infusoria or a liquid fry food at least three times a day. The fry needs fresh water to survive, and to make healthier.

This barb is peaceful and prefers being kept in schools of 6 or more. They can be very shy fish so you should try to keep them in a school to make them feel comfortable. Most other peaceful freshwater fish are suited due to this barbs peaceful nature.