The Green Chromis, Chromis viridis, is known for it’s Blue-Green color and being a great choice for any marine aquarium. They are a very popular addition to home aquariums as they are easy on the pocket when purchased, passive, active, durable and beautiful fish. They will be found in both beginner and experienced hobbyists tanks. 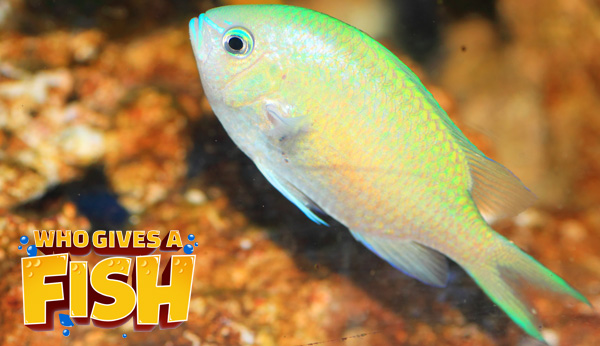 The Chromis species has small color variations ranging from a light blue to pale green, subsequently being named accordingly the Green Chromis or Blue Green Damselfish. Interestingly, during times of nesting mature males can exhibit a yellow color.

With a maximum length of 3 ¾ inches (10cm) they are easily kept as a single fish in a small tank or in groups in larger setups. This Chromis is not to be confused with the similar Blackaxil Chromis Chromis atripectoralis who look alike but with reach an inch longer. Blackaxil Chromis are found with a light gray spot on the base of their pectoral fins.

In the wild, the Green Chromis are known for their beautiful social habits of being found in large shoals with numbers reaching into the high hundreds. Large shoals can be described as looking like a large blanket or sheet in the water column. Interestingly, Chromis don’t form bonded pairs, but instead males and females will both breed with several individuals with males eventually guarding nests full of eggs.

The Blue Green Chromis is categorized as a Damselfish however not sharing the same aggressive nature as many of its Damsel cousins. This species will do well with other peaceful species of fish, invertebrates and corals. Although able to be housed as a single individual, their natural schooling behavior will see them thrive better when in a group of 6 or more. The Chromis holds a hierarchical structure within its groups, so holding a group any less than 6 can see aggression towards individuals at the bottom.

These dazzling little fish are generally very easy to keep due to their nature. When housed in the correct numbers, these smalls schools can provide endless hours of beautiful social behavior and movements through your tank. They are known to be a delicate little fish however, relying on good water quality as well as the proper social makeup from both their own kind and other non-aggressive tank mates. They will generally eat anything that is provided but recommended are meaty foods with small amounts of veggie flakes from time to time. Chromis are planktivores so feeding at least 3 times a day is import and recommend if possible. The upper region of the tank is often a favorable area for them as well as branching SPS corals to hide themselves in.

This type of Chromis can best be described as a slender fish with a deep forked tail fin. Their small build allows them to move quickly through the water and utilize even the smallest of nooks and crannies as safe zones, as well as aiding in the schooling behavior they are best known for. They won’t grow above 3 ¾ inches (10cm), with the majority sitting around the 3 ½ inch mark. There is no real size difference between males and females. Lifespan is generally around 8-15 years in a home aquarium, with this being significantly shorter in the wild, around 3-8 years.

Chromis colors range in color from a valiant green, to a blue-green mix which can also be affected by lighting. A small amount of silver-white can be seen underneath the eye. During spawning, males will go through a drastic color change, moving into a yellow or green-yellow color.

The Blackaxil Chromis Chromis atripectoralis is similar in appearance, with the only major differences being an inch longer and having a dark spot around the base of its pectoral fins which isn’t found in the Blue Green Chromis. 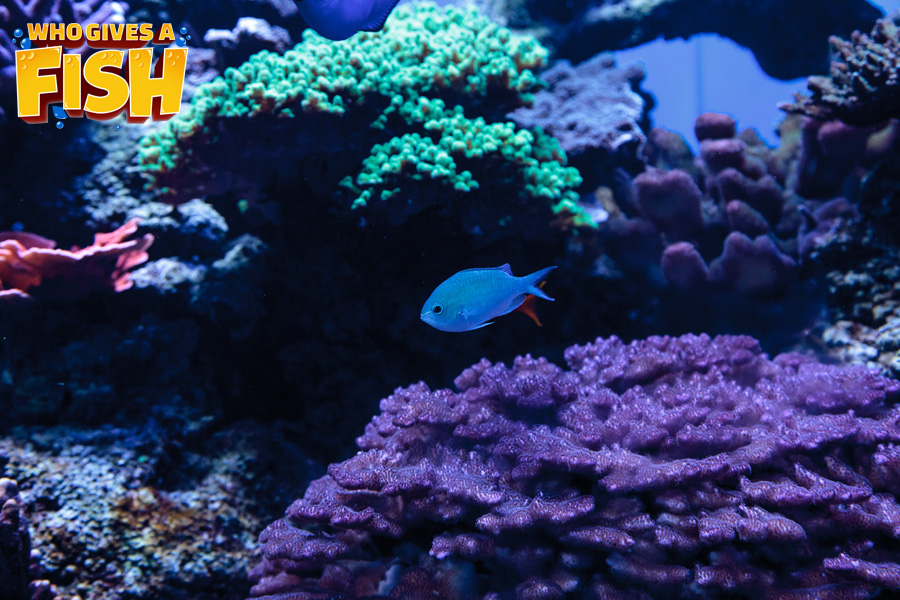 A healthy, well colored Green Chromis in a reef tank

A large or small aquarium is sufficient to keep the Blue-Green Chromis in. Ideally, they should be kept in a tank no smaller than 30 gallons (114) liters per single fish. If a school of 6 is to be kept, increase this minimum number volume to 55 gallons and increase it each time a new member is added. It has been well observed that keeping the Blue-Green Chromis in a group less than 6 results in the smallest of the group becoming heavily harassed and often leading to being killed, with the next lowest ranking member being left to take its place and the harassment continues.

Ensuring your reef has ample places for hiding can help alleviate any aggressive issues both within the Chromis shoal and with other tank mates. The Chromis is known to enjoy placing themselves in and around branching SPS corals and rock formations. If keeping a fish only tank, the provision of artificial corals is also recommended to maintain a safe and comfortable environment for them for shelter and sleeping. At the same time, the Blue-Green Chromis enjoys spending time in the upper regions of the tank so ensuring there is a good balance between rock work and open areas is important.

No specific substrate or lighting is needed as long as the substrate is maintained, and lighting is sufficient and timed well – remembering to take in any corals you have into this consideration. Water currents can be almost anything however temperatures need to be maintained between 72˚F to 82˚F (22 – 28˚C, and ideal pH levels kept of 8.1-8.4. As seen in Clownfish, their optimal spawning will occur in temperatures between 79°F to 83°F (26°C to 28°C). 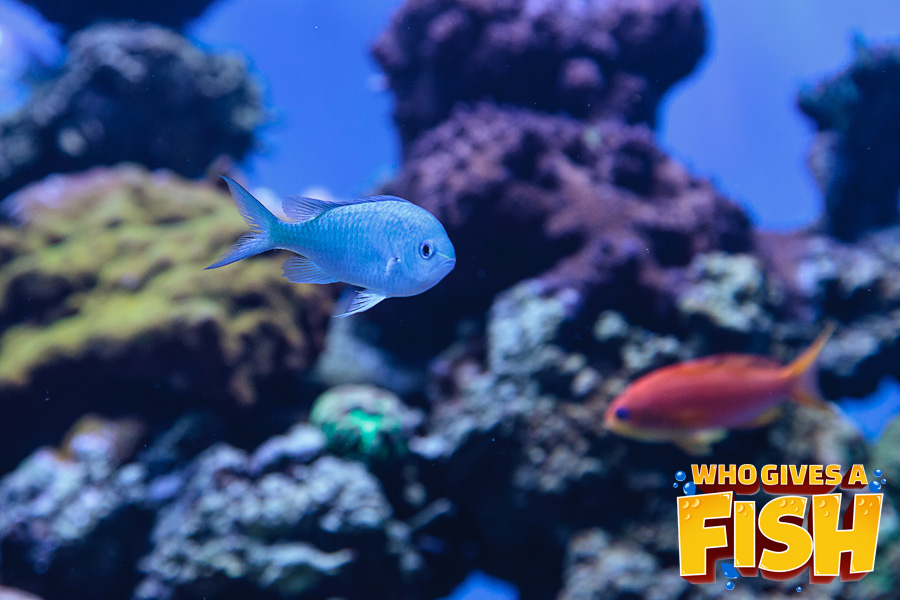 A Blue-Green Chromis in a home reef tank

This is by far one of the easiest fish to keep in a marine tank and are popular among beginner hobbyists due to their hardy nature and simple requirements. They do rely on good water quality and suitable tanks mates to avoid disease brought on by stress within the tank. Keeping up with regular water changes, a variety of food and proper selection of fellow species in the tank will see any Chromis addition to the tank a successful one.

Being such an easy fish to keep, a single individual or a group of 6 or more is no problem to manage and will contribute to a cohesive fish community. Ensuring there is no or as few as possible fish that are overly aggressive in the tank, there shouldn’t be any problems. Aquarists are encouraged so watch closely for behavior such as an individual maintaining its position alone in the top of or in a corner of the tank. If so, this individual should be removed as a result of harassment from other fish.

The Blue-Green Chromis are omnivores, but largely planktivores. Filamentous and floating algae will be an addition to their diet during some summer months. Feeding in the water column will give them access to such foods as fish larvae, fish eggs, polychaetes, amphipods, shrimp larvae and copepods.

Foods such as enriched brine shrimp and Mysis shrimp are a great addition to the feeding schedule in a home aquarium as well as some finely chopped fish or shrimp and flakes for herbivores every so often to bulk this up. It is highly recommended to wet any pellets being fed out first to avoid any air entering the fish’s digestive tracts. 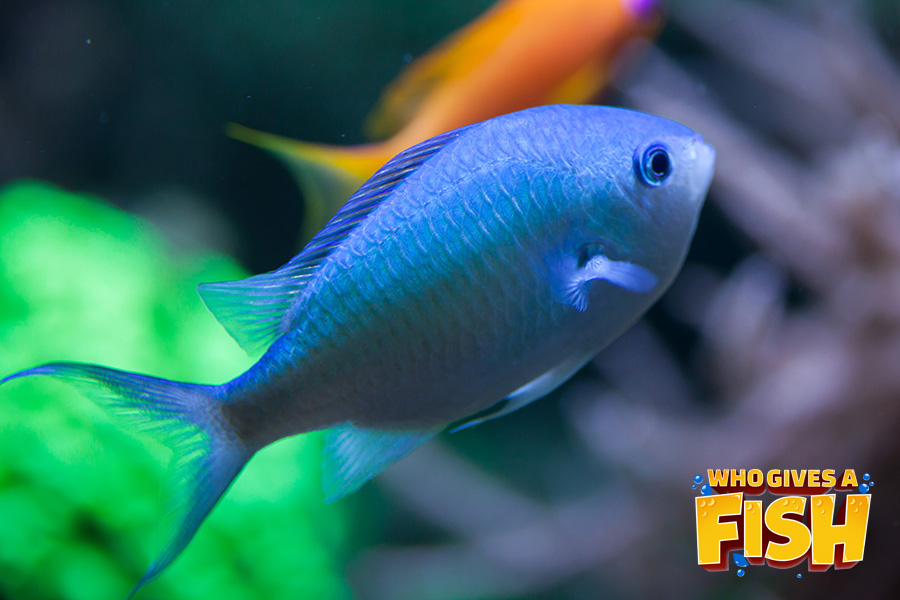 A great example of a healthy Chromis in a home aquarium

Male and females are the same in appearance, with the only change happening during spawning when males turn a yellowish color.

The Blue Green Chromis has been successfully bred in captivity before, with spawning being recorded every 2 weeks. If no suitable space is available for them, they will use the size of the tank wall. It should be noted that in captivity, crabs, wrasses, serpent stars and bristle stars will eat the eggs of Damselfish. Chromis eggs and larvae are smaller than that of the clownfish are very hard to rear.

Perfect water conditions and suitable tank mates are essential for successful breeding. Similar to Clownfish, all Chromis species have optimal spawn conditions of between 79°F to 83°F (26°C to 28°C). They will create what is known as an “algae mat” as they scatter their eggs over their nesting site. This area generally consists of a piece of sponge, some rubble or sand.
Males will develop a territory on the sea bed which will be wither under or to the side of the school of Chromis. The male will enter the school and begin to circle a female. If she is in breeding mode and accepting to him, she will then follow him back to his spawn site. From here, he will then rub his genital papillae on the algal mat, the same behavior then displayed by the female as she lays her eggs. This male will then repeat this process with other females from the shoal, until his nesting site is full of eggs.

These eggs are approx. 0.6-0.66mm long and 0.42-0.49mm wide, with small stalks attaching them to the algal mat. Once the nest if full males will then guard it while keeping the site ventilated. If any of the eggs “go bad” he will then feed on these to avoid them affecting any of the others. Eggs will hatch in-between 2-3 days dependent on water temperature. Larval stage will stretch from 17-47 days, with eggs and larvae being much smaller than that of the clownfish. 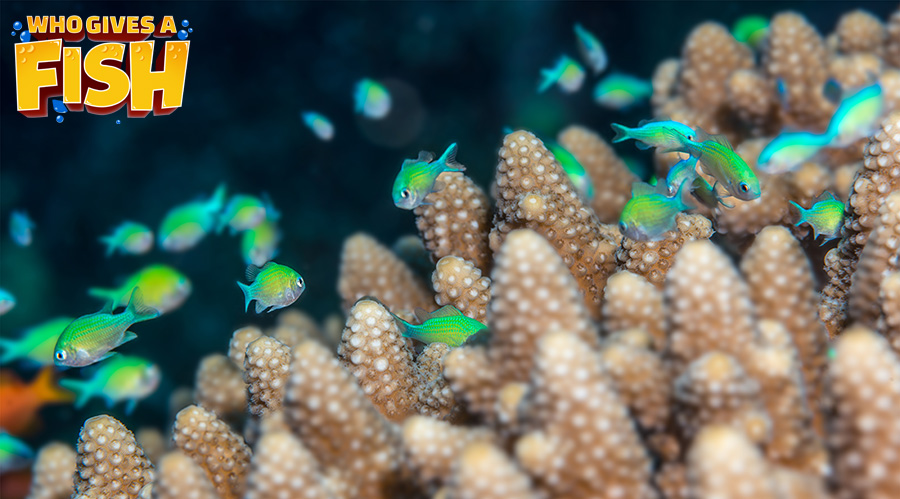 When it comes to aggression in Damsels, the Blue Green Chromis is very much so the exception. They maintain a passive demeanor throughout their lives from juveniles to adulthood. They are great tank mates and will do well with almost any other fish of similar nature. Keeping a single fish is fine as well as holding a school of 6 or more. If a single Blue Green Chromis is to be kept then it should not be housed with other aggressive and semi-aggressive species as it will quickly become a target of aggression and will begin to hide more often avoiding feeds.

In large Aquarium setups, keeping schools are a fantastic choice as the behavior they bring is a joy to watch. With the right lighting, even a small group of The Blue Green Chromis will provide glimmers of shining blue and green as the school together. It is important to remember the rule of numbers for the Chromis, with a group no smaller than 6. Their hierarchical structure can be detrimental to the lowest ranking individuals if the numbers are not correct. Often marine hobbyists will make the mistake of assuming a group of 4 will become 2 pairs, only to witness the 4th in line become harassed and often killed.
When being housed with other species, they will do well with other passive and semi-aggressive fish such as peaceful tangs. Housing them with species such as anthias and pygmy angelfish is not advised. Large semi-aggressive fish will be fine if being kept in a large setup as long as these are species that are known to be less frequently aggressive. Some of these species include the Trigger fish e.g. Niger Trigger. More aggressive triggers have been known to target Chromis. The same rule applies for housing with tangs and surgeonfish, ensuring you don’t house them with any large aggressive fish that have the capabilities of swallowing a Chromis whole. Be sure to watch out for a single Chromis spending time alone in either the top parts of the tank, in a corner or hiding in and around rock work and corals. If so this individual needs to be removed for its safety or the numbers readjusted.

The Blue Green Chromis will not disturb any of your corals and enjoy spending time in and around branching SPS corals. Chromis are known to enjoy sleeping in the branches of the SPS, with the movements from their fins been seen to prevent detritus affecting colonies, helping maintain healthy conditions of SPS as this detritus kills polyps when built up.

Copepods and amphipods are safe from the mouths of the Chromis, however they will enjoy feeding on floating larvae and planktonic inverts.