The Odessa barb is an alluring aquarium fish, but not as widely known as its famous barb relatives such as the Rosy barb and the Cherry barb.

The Odessa can still be difficult to find in general pet stores and you might need to visit a fish auction, purchase them over the internet or contact a breeder directly. 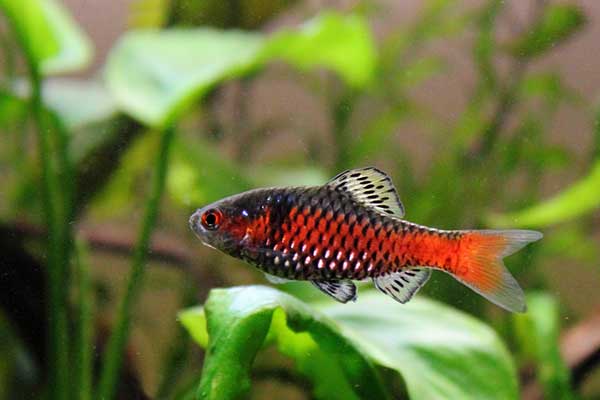 The Odessa barb is potamodromous and benthopelagic freshwater species indigenous to South East Asia; from the Thailand to the Himalayas.

Its indigenous regions include Bangladesh, China, Bhutan, India, Laos, Nepal, Myanmar (Burma), Pakistan, Thailand and Sri Lanka. Odessa barbs live primarily in the upper Mekong, Salween and Irrwaddy, as well as in the upper parts of the Chao Phraya basin.

The common Odessa barbs habitat generally consists of shallow and still water in streams and rivers. The bottom is usually muddy and the Odessa spends most of its perusing near the substrate in the shallower water.

Odessa barbs generally reach a length of around 5-7.5 centimetres (2-3 inches), but can usually grow up to 10 centimetres (4 inches). There are no discernible difference in size between males and females, but the males have leaner bodies.
The Odessa barb has a light brown color to its body, and the sides of the fish are adorned with two black spots. The black spots are more recognizable in males.

Both sexes can display a reddish-brown banding. In sexually mature males, the reddish-brown band will turn into a broad, bright red band that begins at the tip of the mouth, runs through the eyes and continues down the side to the tail. During the breeding cycle, it is also natural for the male to display a more intensified body coloration than usual.

Odessa barbs should be kept in groups of at least 5 other Odessas, but preferably more. Keeping fewer barbs will generally result in very bashful fish that spend a lot of their time sitting or hiding at the bottom of the aquarium. The stress from being alone can also lower their immune system, and make them more prone to illness.

The aquarium where the Odessa barb group is kept should be at least 60 centimeters (24 inches) in length. Try to mimic the common Odessa barb habitat when the aquarium is set up. The wild barbs inhabit marginal, still water of rivers and streams in South East Asia. A well planted aquarium is favored, but an open area for swimming should also be included.

In Comparison to the tropical fish species, the Odessa barbs are accustomed to rather cold water temperatures; ranging from 64.5 – 71.5° F (14 – 22° C). They are therefore suitable for unheated indoor aquariums. 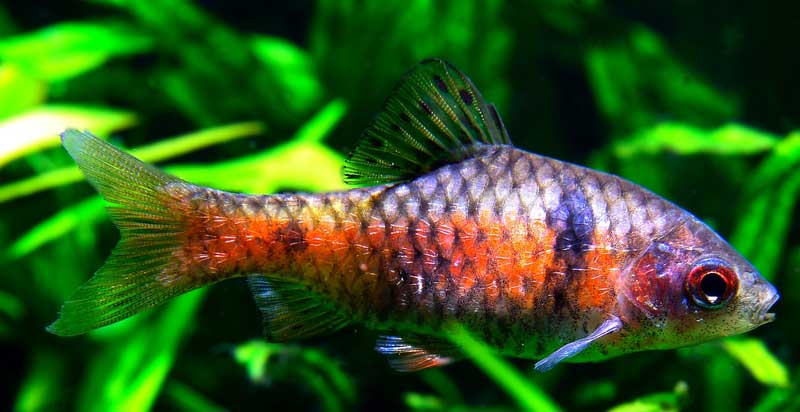 Wild Odessa are omnivores, and as such feed on crustaceans, insects and plankton. In the aquarium, they are generally very happy eaters so long as they are healthy. They will welcome most types of food. You can use high quality granules or tropical flakes as a starting point, and give the Odessa barb the occasional treats in the form of daphnia, shrimps, or freeze-dried or frozen worms. Beef heart is also quickly consumed.

These wild barbs a highly prolific and have a minimum population doubling time of less than 15 months. They are egg scatterers and they do not engage in parental care. Approximately 150 eggs will be released in batches of roughly 20 at a time. After one day, the eggs will hatch. The fry will be then become free swimming within 24 hours.
If you want to breed Odessa in captivity, you should ideally keep them in a well planted aquarium.

As mentioned above, they are egg-scatterers that do not raise their young, and they will therefore not hesitate to eat their own eggs and/or fry in the aquarium. If you want to ensure a high fry survival, you should set up a special fry raising aquarium and remove the adult fish after spawning. If you do not wish to arrange a separate aquarium, you can let them spawn in their normal aquarium but make sure that it is very densely planted with bushy aquatic plant species that will create a lot of hiding spots for the young. Java fern is one example of a suitable plant. A lot of eggs and fry will still be eaten, but at least a few specimens will usually survive into adulthood.

During the spawning, the male and female Odessa barb will swim to a planted part of the aquarium and the female will scatter the eggs among the plants. It is common for Odessa barbs to spawn during the early morning. The female will release around 20 eggs, the male will then fertilize them, and the female will proceed to lay yet another batch of roughly 20 eggs. This will continue until around 150 eggs have been released and fertilized; a process which can take several hours.

As previously mentioned, Odessa barb fry usually hatch after one day and become free swimming the next. When they have become free swimming, you can start feeding them newly hatched brine shrimp. Even though the fry is small at this stage, they can usually manage to devour newly hatched brine shrimp. As the fry grows larger, you can feed them bigger and bigger brine shrimp. If you keep your Odessa barb fry on a nutritious diet and keep the water quality up, they will grow really fast. The two distinctive spots will start forming when they are no older than a month.

The Odessa can be aggressive with other Odessas in the same tank usually triggered by the males over a dominance position within their school. They are also known to nip at slower moving fish with larger fins, such as Angelfish and Bettas.

Slow swimming fish and fish with larger fins often make an attractive nipping target for this Barb if your tank is too small or overcrowded. Other Barbs can get on well provided the tank is big enough.