The Rosy barb is a rugged fish and stays fairly small. These two factors, combined with its placid nature and beautiful coloration, has made it a favored aquarium fish that can be kept even by amateur aquarists with fairly small aquariums. Welcomed by many aquarists due to its alluring coloration. 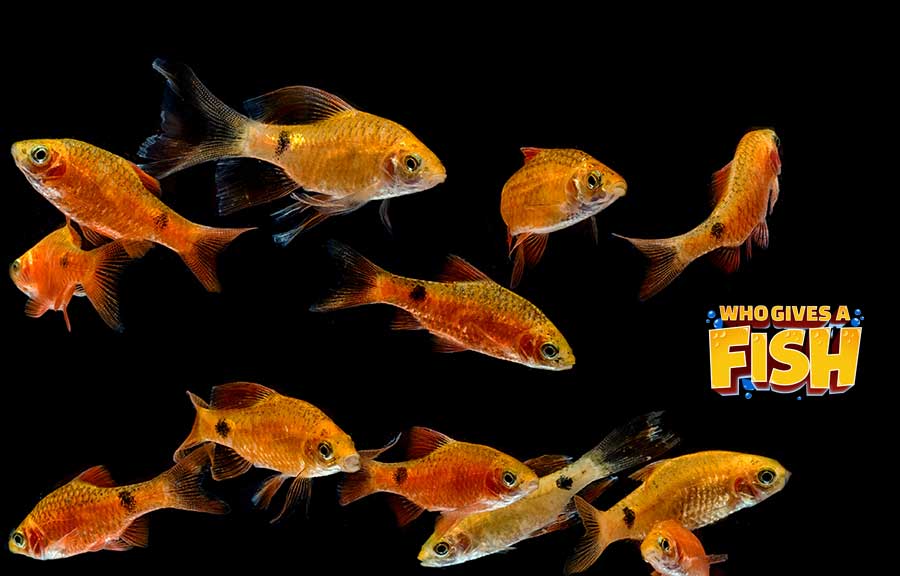 The Rosy barb is a benthopelagic species that tends to inhabit the subtropical parts of Asia. It is indigenous to Afghanistan, India, Pakistan, Bangladesh and Nepal. It may also be present in Burma (Myanmar).

The Rosy barb has been scattered to other regions of the world by man, and well-established populations of Rosy barb can for instance be found in nearby Australia and Singapore, but also in the Americas, Colombia, Puerto Rico and Mexico.

The more common habitats for wild Rosy barbs are fast flowing streams and lakes, and they are often found in hilly landscapes where the water runs rapidly.

The Rosy barbs are well-known by many different names in its indigenous region. In multi-lingual India, it is referred to as Karse in Kannada, Khavli in Marathi, or Puthi in Assamese and Chikka karsae.

In Nepal, the Rosy barb is referred to as Pothia sidre and in Bangladesh, the Bengali speaking comminty has named this particular species the Kanchan punti.

Rosy barbs can be housed in outdoor ponds and aquariums. If you are to keep your Rosy barb in an outdoor pond, you may want to consider bringing them indoors during the winter months if you live in a colder part of the world, since water temperatures below 60°F (16°C) should be averted.

Always try and keep at least 5 Rosy barbs together, as this fish will feel very stressed if kept in solitude. An aquarium of at least 30 gallons (114 liters) is recommended. When you first set up the aquarium, it is essential to keep in mind that Rosy barbs can grow up to 5.5 inches (14.0 centimeters). Pet stores will usually sell Rosy barbs that are of a much smaller size. Try to copy the common Rosy barb habitat when you are setting up the aquarium.

Be sure to include plenty of aquatic plants, but try to avoid plants of the soft-leaved species, as the Rosy barb may destroy them by biting too much. If you want to be on the safe side, you can choose an extremely rugged plant species such as Java moss that will accept Rosy barb attacks. A few aquarists have reported that their Rosy barbs cab help with controlling algae growth in the aquarium by eating hair algae. 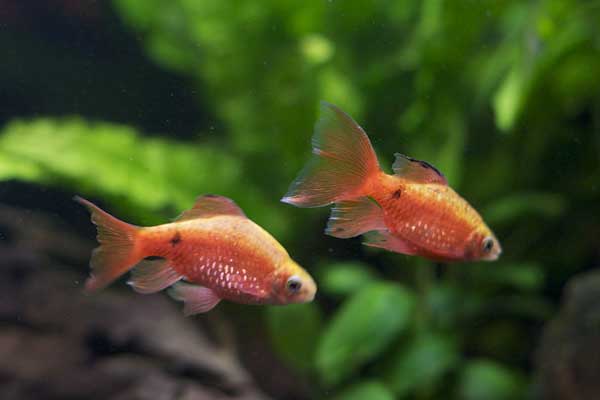 A pair of Rosy Barbs – Source

Rosy barbs are considered to be one of the easier fish species to care for in while in captivity. It is one of the most hardy barb species and it is often successfully kept by novice aquarists. Rosy barbs are rugged and can acclimatize to almost any water condition so long as you avoid the extremes.

Rosy barbs in the wild are strategic omnivores that feed on crustaceans, plant matter, insects and worms. They are cheerful eaters in the aquarium, and welcome a wide variety of foods, including frozen foods, flakes and pellets. Vegetables, such as peas and boiled Zucchini are appreciated.

Rosy barbs will also eat live food if it is small enough to be considered prey. These barbs can help control extreme algae growth since they feed on algae, and a few aquarists have also noted their Rosys are a good way of tackling hair algae. They will however also feed on other plants in the aquarium, so delicate soft leaved species of plat should usually be avoided. Since these barbs are such cheerful eaters in captivity, they are prone to over feeding. They can also establish nutritional deficiencies if kept on a repetitive diet of low quality prepared food that doesn’t include all off the necessary nutrients.

Like many freshwater tropical fish, the male is usually more colorful and has a more defined red coloration. The female usually will not have the red colors, however, if they do, it’s usually a slight amount of red and she will be predominantly of a yellow, olive or gold coloration.

Wild Rosy barbs will distribute their eggs on some type of substrate or usually just release them in the open water. The female Rosy barbs can produce hundreds of eggs in each spawning. Rosy barbs do not care for egg or fry and have been known to eat their own offspring. If you want to make sure that the fry survive, you can set up an independent breeding aquarium. A 20 gallon aquarium should be large enough.

It is preferable to include plants in the set up. Professional Rosy barb breeders generally let them breed in outdoor ponds where there is sufficient space for the offspring to keep away from the adult fish. If young fry are raised in a smaller aquarium, their growth can be stunted.

These barbs are generally peaceful but if you don’t have a small school of them (usually 5 or more) they often become fin nippers and aggravate other fish in the tank. Getting only of couple of them will surely bring out their aggressive behavior.

Avoid keeping these barbs with fish that are long-finned and slow moving. They will almost certainly not do well with this barb.