The Tinfoil barb generally grows rather large, anywhere up to 14 inches in length (35 centimeters) and it is therefore not viable for small aquariums. Amateur aquarists often purchase young Tinfoil barbs without first doing the research on how big this fish can actually grow, and that it is generally advised to keep at least 5 specimens together. The Tinfoil barb is also used as food fish in its indigenous region and grown in aqua-cultures. 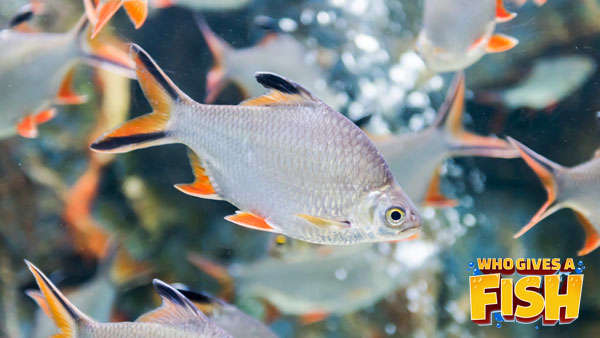 The Tinfoil barb is a potamodromous and benthopelagic species indigenous to Vietnam, Thailand, Brunei, Darsm, Singapore, Indonesia, Malaysia and Laos.

Along each lobe, you can see a dark black sub marginal stripe. There are 8 scale rows based between the dorsal-fin and the lateral line.

The recommended aquarium size for Tinfoil barbs will naturally depend on how large the specimens are, but 55 gallons (208 liters) is considered an absolute minimum.

Try to mimic the natural Tinfoil barb habitat when you set up the aquarium for your Tinfoil barbs. Wild Tinfoil barbs inhabit moving waters in Asia, such as rivers, streams, canals and ditches, and will therefore appreciate currents in the aquarium.

Wild specimens are primarily herbivores and will eat submerged land plants, aquatic macrophytes and filamentous algae. They will also eat small fishes, worms, insects and crustaceans. In the aquarium, Tinfoil barbs are usually cheerful eaters that will happily accept most types of food. Healthy specimens will try to eat as much food as possible when you feed them.

Avoiding over-feeding is crucial, since obesity is unhealthy for all fish. Make sure to keep your Tinfoil barbs on a diverse diet that consists of a herbivore base, supplemented with the odd treat in the form of crustaceans and worms. 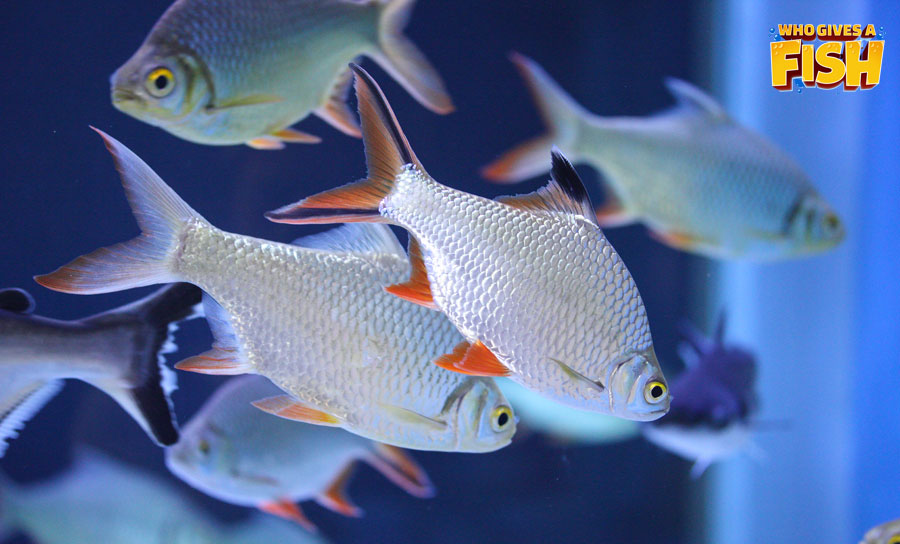 A school of young Silver Barbs in a large aquarium

This fish is of the egg scattering kind and, the female is able to produce several thousand eggs each spawning. Sexing Tinfoil barbs can be difficult, since there are no obvious ways to differentiate between males and females.

As the Tinfoil barbs are egg caterers, they will not care for their eggs properly. It is very likely that they will eat egg and/or fry if they are kept together in the same aquarium. If you are planning to breed them, it is beneficial to arrange an independent breeding aquarium where the offspring can be raised without the existence of adult fish.

If you want the offspring stay together with the adult fish in the larger aquarium, you can bolster a higher fry survival rate by including a lot of plants in the aquarium. Java moss will produce a lot of hiding spots for the young barbs, as Java moss produces an abundance of bushy leaves. The fry will naturally seek shelter and try to stay away from adult fish in the aquarium, just as they would do in the wild.

This species is peaceful enough for a very large community tank, but they have been known to eat smaller fish.

Tinfoil barbs should generally be kept together in a group that consists of at least five of the same species. The group can be housed together with other placid fish species of a bigger or similar size. If you have an extremely large aquarium, you can keep a group of Tinfoil barbs together with big cichlids, such as the Oscar fish, Astronotus ocellatus.

Tinfoil barbs are often kept together with jittery and shyfish species, since a calm school will make less amicable fish species feel much more relaxed in the aquarium environment, and inspire them to spend more time out in the open, instead of staying hidden away. They are primarily herbivores, but should not be kept with other small fishes and crustaceans, as they can be considered food.