As they both have a very “lemon” color, the two Angelfish can be easily distinguished from each another. 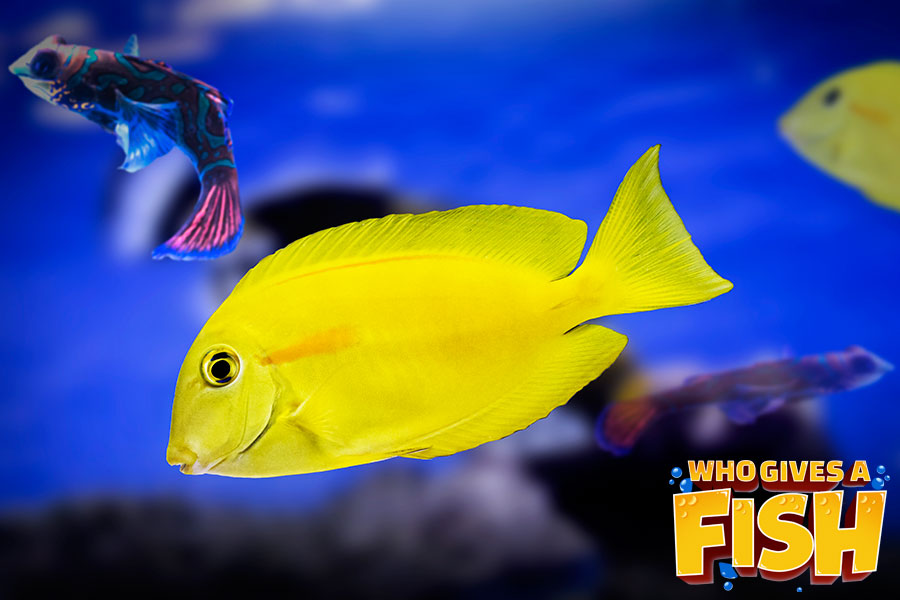 The C. heraldi does not have the blue ring about the eye and on the cover of the gill, nor does it have the modest blue markings on the corners of its fins as can be seen on the C. flavissima. Furthermore on C. heraldi, the hind area of the male’s tail fin and dorsal fin are slightly jagged. But other than these minor variations, they look very similar.

The males can have a small piece of black on their face, otherwise both sexes are all yellow. There is an alternative from the Great Barrier Reef, in the Coral Sea. This particular variety has a black parallel band with blue edges on the very back-top of the dorsal fin and usually a black saddle on the back.

It was first thought to be a distinct species, more commonly known as the Woodhead’s Angelfish and depicted as the Centropyge woodheadi. But it is now accepted as a variation in color, and is actually the same fish. Other common names for this species include the Heraldi Angelfish, Golden Angelfish, Yellow Angelfish, Yellow Pygmy Angelfish and the False Lemonpeel Angelfish.

This dwarf angelfish not only adds an alluring dash of yellow to your tank, but it can also help to control a diverse range of diatoms and algae. Even though it looks like almost a carbon copy of the Lemonpeel, it is a much easier fish to keep. It is not as dependent on algae in its diet, and will happily welcome a diverse variety of aquarium foods. This fish is moderately sized, and can reach over 4 1/2 inches (12 cm) in length. But it is usually placid, and with a well-suited environment, it can live to well over a decade.

This is an excellent dwarf angelfish for the average aquarist that wants to add some yellow coloring into their aquarium. They are reasonable to care for, yet still need an properly sized tank. Although it has been known as a species with a 50/50 survival rate, which may be due to collection habits, once acclimated it can become a rugged pet. An adolescent fish could be contained in a tank as small as 30 gallons, but as an adult it will not be as aggressive and more suitable to survive in a tank that is at least 55 gallons or more. The tank should be sophisticated, and have a substantial amount of algae growing on the rocks, which can contribute a main source of food for the fish. When they are first collected, they may not feed straight away, and this algae can assist them until they acclimatize. Form the live rock into caves and deep crevices so they can hide when they are feeling threatened.

The nice thing regarding this angelfish is their desire to eat micro algae and detritus, both of which aquarists do not want in their tank. So you can think of them as part of your clean-up team. However, when it comes housing them in a reef tank, there are some risk to corals. They are not as hazardous to other reef inhabitants as the Lemonpeel / Bicolor Angelfish, Centropyge bicolor, but still justify being watched closely. Some invertebrates are all right, but a few copepods may be ingested accidentally, as they inhabit the algae.

They will thrive in a classic reef setting with plenty of places to hide, and a lot of rocks. The requirements for the aquarium is that it needs to be at least 6 months old to supply all of the required algae to feed your angelfish. Even young fish need a well-established tank. Apart from the live rock, it is useful to have regions of rubble for algae to grow on, which will assist in feeding them their required veggies.

At least 55 gallons are required for one fish as this will provide the minimum of 1.5 to 2 lb. of live rock per gallon required in order to grow an abundance of algae crops. It needs to be over 150 gallons 2 fish that are unsexed, and between 75 to 100 gallons for a mated pair, whether they are different species or the same species of dwarf angelfish with similar natures. Add a dwarf angelfish at the same time and as the final inclusions to your tank. A long tank, rather than a taller tank is preferred due to them swimming near the bottom for most of the time. Nano tanks are out, not even when the dwarf angelfish are young, as it is unable provide sufficient algae growth.

A great video of a Yellow Angelfish in a reef tank

The Herald’s Angelfish are somewhat difficult to keep, and recommended for an intermediate aquarist. They are deemed somewhat difficult to care for due to their continual grazing habits. They can acclimatize nicely to captivity if there is an abundance of organic algae and they are kept in a low stress habitat with the ideal tankmates. A hearty individual who is curious about it’s surroundings, alert and eating will have the best chance of survival.

They require a mature tank that is at least 55 gallons (208 l) with sufficient algae growth. Of utmost importance is numerous hiding places, so they will feel secure assured to come out. The tank needs to be at least 150 gallons in order to add another species of dwarf angelfish or for unsexed individuals. Moving the rocks around may aid with combativeness, yet if one of the dwarf angelfish are floating in the top corner, it is never a good sign and should be taken out.

The Herald’s Angelfish is classed an omnivore, but leans more towards a herbivorous diet. It mainly eats worms, small crustaceans and algae while in the wild. Feed it up to 3 times a day to complement organic algae growth on your live rock. Without herbivore foods, angelfish can become blind within a few months, so they need to have algae growing in the tank or receive sufficient amounts of algae supplements. Offer foods including pellets or flakes with spirulina in the formula, alongside preparations specifically for dwarf angelfish. There are a few quality commercial foods available including Angel Formula and Formula II. A tank with a small amount of copepods and amphipod populations would need a small supplement of meaty items like finely chopped marine flesh, mysis shrimp or gut loaded brine shrimp.

A healthy Herald will be observed picking at the algae on rocks, and once acclimatized, they should take food from the water column. Usually smashing food into the rock may help if you have a fussy eater. This dwarf angelfish will aid in controlling the green algae Crunchy Hair Grass of the Boodlea genera and a few other types of Green Hair Algae Derbesia species such as the Derbesia marina, Diatoms, Green String Lettuce, some other hair-like algae including types of sea lettuces such as Ulva ridida and Ulva lactuca, Berbesia marina, Diatoms, a few other types of hair-like algae such as Enteromorpha prolifera, E. linza, E. intestinalis ,and also Green String Lettuce. It is also noted to control some types red slime algae, as well as two species of the Oscillatora genera.

At the time of writing, there are still no reports of reproductive performance in aqua cultivation or tanks yet. In their natural domain, it has been noted that all Centropyge angelfish have a spawning routine that is very alike, where the male will court up to several females. The female and male revolve around each other upon meeting, followed by the male producing grunting noises to gain her attention. Then, the male will swim upwards and hover, leaning his body toward her at a 45 to 90 degree angle. If she is set to spawn, the female will connect with him and both will drift upwards.

When the drifting technique is complete, which can vary between dwarf angelfish species, the male will nudge her belly for around 18 seconds, followed by the male opening and closing his mouth, and flickering his pectoral fins. Promptly, they are belly to belly, releasing gametes and manufacturing fertilized eggs that free float until they are responsible enough to settle into the substrate and begin their new lives without protection or parental supervision. The pair will then dash back to the bottom, with male chasing the female for a small amount of time, and then moving onto the next willing female in his harem.

Though overall they are peaceful, like all dwarf angelfish they can be semi-aggressive when they need to compete for food and space. Avoid other algae eating fish that will compete for food. They get along with most placid fish, just don’t house them with large predatory fish or smaller aggressive fish like dottybacks that can stress them out. A male/female pair can be housed in a larger tanks of 75-100 gallons. With any other dwarf angelfish the aquarium must be 150 gallons or more with lots of hiding places and algae growth, and they need to be of a similar temperament to be kept together successfully.