Chrysiptera hemicyanea, or the Azure Damselfish is known for its beauty. A small hardy fish that won’t grow any bigger than 2 ¾ inches or 7cms long. They have a wonderful electric blue/purple and yellow pattern to them. They have a nice personality and are not seen as causing problems in aquariums very often.

They normally have a pretty reasonable price tag to them and are one of the more popular Damselfish for hobbyists. They are also known as the Royal Demoiselle, Half-blue Damselfish, Yellow-dipped Damsel and its most common name the Azure Demoiselle. 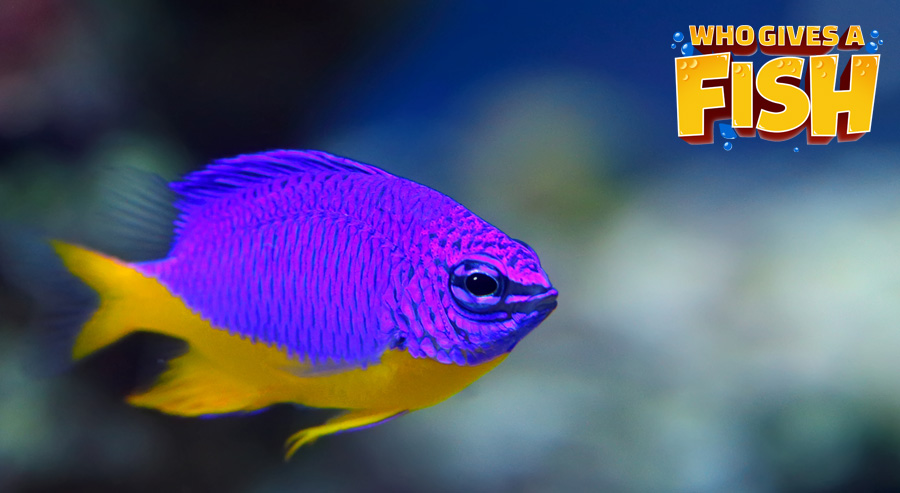 The Azure Demoiselle are easy to keep and known for being very resistant to disease. They are generally easy to find for sale and have relaxed personalities. They will do well in both reef setups and fish only aquariums. They have a good appetite and will eat almost anything provided to them. Rock and coral setups that provide many hiding places for them is necessary to keep these fish happy when housed with other bigger fish. Lighting and special currents for them are not needed and they will generally spend their time around the bottom part of the tank.

They are deep bodied fish with a maximum length of 2 ¾ inches (7cm). They have a lifespan of approx. 2-6 years in the wild and up to 15 years in captivity. The head of the fish and its upper sections are a deep blue color with the abdomen, chest and caudal peduncle being yellow. They have a number of fine vertical black lines on the blue areas and some lighter blue spots found below the eye level of the face. They will also have 2 black lines just before the eye with one line continuing through the eye itself. A blue dorsal fin is seen with the others being yellow and a black spot found at the base of the pectoral-fin. 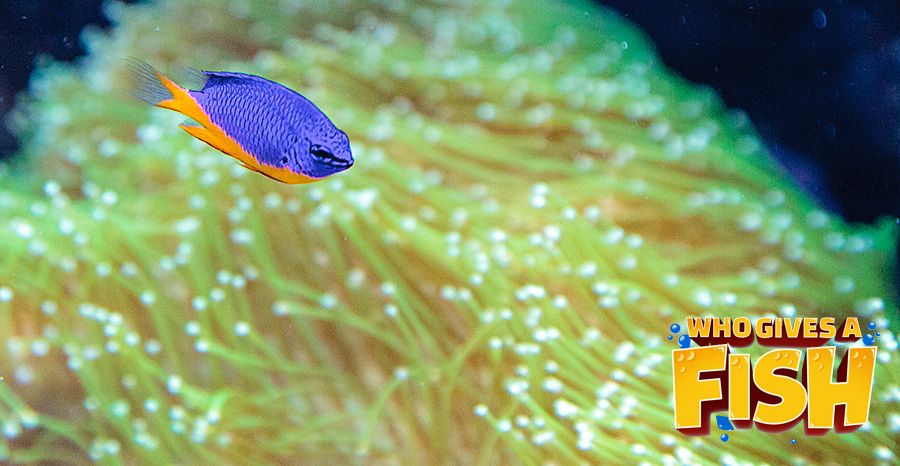 The Azure Damsel makes for some stunning color contrasts

The Azure Damselfish is kept well in a reef setup or a peaceful fish only tank. They don’t generally grow any bigger than 2 ¾ inches so a tank size of 20 gallons for a single fish or pair is needed. Ensure you have plenty of rock work to allow them hiding places when they feel threatened and to sleep in, as well as plenty of space for swimming as they are active little fish. Nano tanks are fine for them if they are the only fish in the tank.

They are defiantly one of the more peaceful Damselfish. They enjoy swimming in mid to lower parts of the tank, as they are preyed upon in the wild they need many places to dart into quickly to feel safe. They will utilize small nooks and crannies in the rock and coral work and a sand bed is not needed with these fish as they are not known for diving into the substrates.

The usual water parameters are recommended for these fish. Water temperatures of 74°F to 84°F (23° – 29°C), with pH from 8.1 to 8.4 will see them stay healthy and live long. Breeding temperatures are similar to that of Clownfish with optimal spawning happening between 79°F to 83°F (26°C to 28°C). 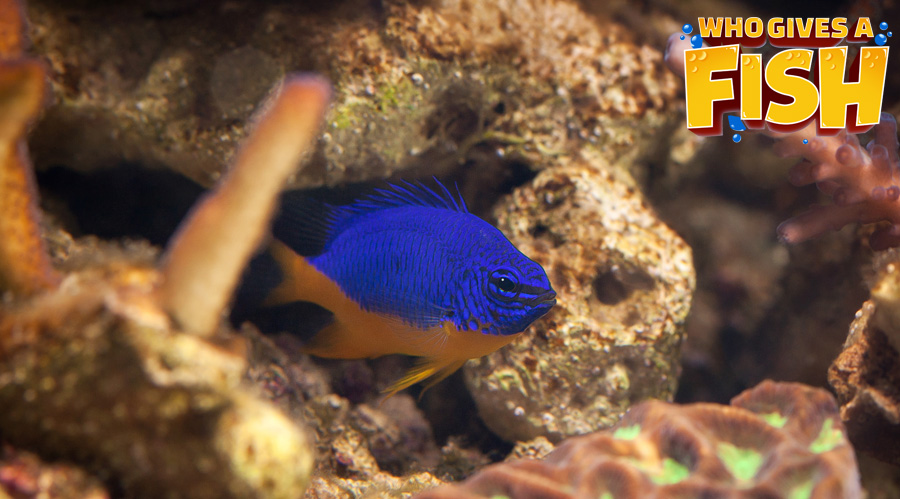 The stunning deep blue and purple colors extend into the eyes

The Azure Damselfish are generally very easy to take care of, making them great fish for beginner hobbyists or even the experienced aquarist. These beautiful fish are very hardy and will eat almost anything provided making them great fish with no special attention need. They are normally very active fish and will even come to the surface for foods with they are comfortable in the tank. They will handle a wide range of changing temperatures but like other damsels who are hardy, they will fall victim to prolonged poor water conditions.

A minimum tank size of 20 gallons is needed for one fish or a mated pair. Water changes in a smaller tank need to be done more regular especially if there’s a pair. They will do well in a coral tank as well as a fish only community but as they are preyed upon in nature, the right house mates needs to be selected carefully. Ensure you have plenty of places in your rocks and corals for them to hide in. They don’t use a sand bed so one is not required for them. Keeping this little fish happy and safe comes down to regular water changes, variety of food fed a few times a day and the right house mates.

The Azure Damselfish are Omnivores. In the wild they will feed on zooplankton and also some algae. In the home aquarium it is important to provide them with a diet that has lots of proteins.

Meaty foods like frozen seafoods, Cyclop-eeze, brine shrimp that are vitamin-enriched and mysis shrimp are ideal for them, they can also be fed some flake foods at times. Bright coloring can be maintained by providing some color enhancing foods.

Small amounts of feeds several times a day is the best way to feed them. Feeding more regularly helps eliminate any tension in the tank with other tankmates as the Damsels can protect their little area of the tank a lot during feeds. Ensure any pellets fed are wet before adding to the tank to avoid any air getting into the fish’s digestive tracts and cause problems. 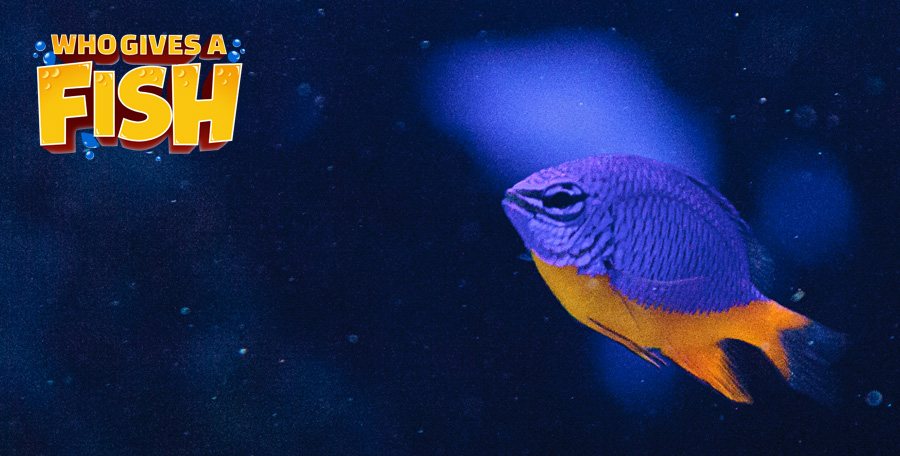 A young Azure Damsel in a home aquarium

Currently there is none known although males are thought to be larger. Like others in the same genus a male will be seen moving quickly with more intense coloring attempting to attract the females into spawning.

All of the Damsel species are found to shadow the breeding patterns of Clownfish. Breeding successfully requires perfect water conditions and ideally an environment that is predator free. To date, optimal spawning will occur between temperatures of 79°F to 83°F (26°C to 28°C). An added difficulty in a captive situation can be found if tank mates include crabs, wrasses, serpent stars and brittle stars, all of whom are known to feed on the eggs of Damselfish. These eggs and larvae are a lot smaller than that of a Clownfish and are very difficult to rear successfully.

These Damselfish are known to breed and spawn fairly often in a captive situation. Each mature male will hold its own territory which will be located near a nesting site. This will more often than not have some rubble or even half a shell from a clam at its entrance. The mating procedure is quite remarkable. The day prior to spawning the female will make a visit to the males within her colony and will include males she has mated with previously. Once an appropriate male has been selected, she will stop moving, face upward and flash a light ring around each of her eyes. Upon selection, the chosen male will begin an ambitious courting routine to impress the female. If he is successful, the female will then follow him to his nest to see how many eggs are present. Females have been observed to spend up to 20 minutes evaluating a males nesting spot before moving on to the next male. During this time, she is not yet ready to lay her eggs, upholding high standards for a nesting site. Known to travel over 100m in distance, females will inspect many males and their sites.

With the arrival of dusk the following morning, the female will travel to the selected males site. Often this male will be the biggest, with the most impressive courtship “dance” and holds the most eggs. Desirable males can often be chosen by several females. In this instance, each female will wait their turn at the entrance of his nest. It has been observed that up to 4 females can be seen at one nest site after all of them has chosen the same male.

Nest sites can hold up to 10,000 eggs, a combination from several females. Hopeful males will ensure they have as many eggs in their nests as possible to gain a higher chance of being selected. Some males have been known to abandon their small egg clutches and take over lager ones that have been abandoned by other males, staying guard over these eggs until they have hatched which can take up to 4 days. In this Chrysiptera species, the larval stage can last between 10-50 days.

Breeding in captivity is difficult. Although they will often spawn easily, eggs and larvae are very small and the fry are extremely difficult to care for. 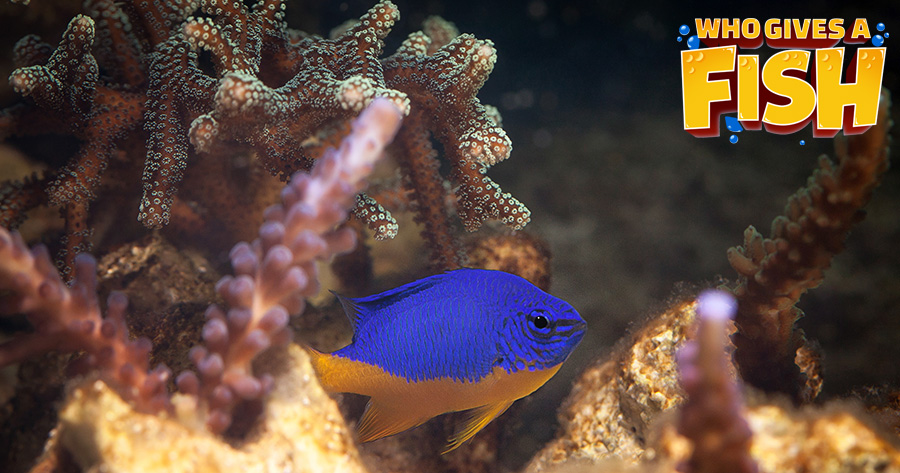 The wary Azure Damsel hiding out in Staghorn Coral

A minimum tank size of 20 gallons per single fish or 1 pair is required for housing the Azure Damsel. If you have a mated pair of these, be careful when adding more fish to the tank as they can fiercely protect their territory. Semi-aggressive fish will get along with the Azure Damselfish but like all the Damsels it is best to be kept in an odd numbered group with ample space.

They are known for becoming more aggressive as they mature and are best to avoid being kept with less passive fish who may be harassed. Lager tanks of over 40 gallons are needed if they are added with others. If setup right they will be a great addition to the tank as they will leave your coals and inverts alone.