Chrysiptera parasema, known better by its common name as the YellowTail Blue Damsel is a stunning little fish. It’s very characteristic appearance of a bright blue body and yellow tail makes it hard to miss despite its maximum length of 2 ¾ inches (7cm).

Some can be seen with a yellow pelvic fin and even yellow pectoral fins when found in certain parts of the world. It has a close relative which it Is often confused with, the Azure Damsel, Chrysiptera hemicyanea, which is very similar in its appearance.

The Azure has yellow fins as well but it different in that it has yellow extending along the bottom of its body.

“The Ultimate Damselfish” is a nickname this species has acquired in the marine world. It has received the award of being one of the favorites due to its active nature and non-fussy eating habits. Like other Damselfish fish, it is very hardy in a tank environment and never takes a chunk out of the wallet when purchased. It is also known as the Yellowtail Damselfish, Gold tail Demoiselle and the Yellowtail Damsel.

With plenty of room in your tank, this Damsel will seldom cause problems in both coral and fish only displays. A minimum tank size of 20 gallons is recommended for a single fish or a mated pair if they are the only residents of the tank. At tank of at least 40 gallons is needed if they are to be kept as a group of more than 2 and when housed with other peaceful species. They have been kept successfully in nano tanks but are better when placed in larger tanks with other non-aggressive species. Due to their size and nature, they are often targets of bigger fish, so larger tanks with ample rocks is needed if they are to be housed with bigger fish.

A very durable fish that is beautiful to watch and a great appetite for any food. They enjoy spending time in the middle to bottom sections of the tank, and benefit from as many nooks and crannies to hide in as possible from both rock work and coral arrangements. Damsels in the Chrysiptera genus enjoy burrowing, so a sand substrate is also recommended for them.

The Yellowtail Blue Damselfish are small, with a maximum size of approx. 2 ¾ inches (7cm). Their life span in the wild is between 2-6 years and have often been noted to reach up to 15 years in captivity.

Reef tanks and fish only tanks are both suitable for holding this damsel. A recommended tank size of 20 gallons for a single fish or mated pair is important to adhere to. If they are to be added to a small tank of this size, they should be kept alone or with other non-aggressive species as they could become territorial in such a small area. If they are to be kept in a nano, the individual or mated pair should be the only fish inhabitants.

A larger tank of over 40 gallons will allow hobbyists to successfully house more if desired and are to be housed with other species. If you are to be housing more damsels and less aggressive clownfish species, a rule of thumb is 15 gallons per extra fish added. Housing larger fish like Tangs and Surgeonfish with damsels requires much larger setups to avoid territorial issues.

The Yellowtail Blue Damsel fish is on the least aggressive of the damsels. They enjoy swimming in mid to lower sections of the tank. Due to being preyed on in nature by bigger fish, they enjoy the provision of hiding areas in rocks and corals. Branching corals are known to be areas frequented by the damsels for safety. In the wild, rubble and dead corals play home to damsels in dig burrows to nest it. Clam shells are also utilized as nesting sites. Sand substrate will provide an easy place for them to burrow in and lag eggs. Providing them with a shell or two is also a great idea.

The Yellowtail Blue Damselfish are without a doubt one of the easiest to care for. Both beginners and experts enjoy adding them to their tanks as they are beautiful in appearance, easy to feed and non-aggressive. They have an appreciation for meaty foods as well as being good at helping with algae control. They will be able to tolerate non -fluctuating temperatures but like any hardy fish, still have a limit on how much exposure to poor water conditions that they can handle.

With a minimum tank size of 20 gallons for one single fish or mated pair, it is important to maintain regular water changes. They are known for being great tank mates as they are non-aggressive, but ad they are preyed on in the wild buy bigger fish, tank mates need to be selected carefully and adequate hiding spots provided. Regular water changes, good feed schedules and agreeable tank mates will ensure happy and healthy lives for these Damsels.

The Yellowtail Blue Damselfish are Omnivores, so should be fed accordingly. Zooplankton and other planktonic foods and algae are a big part of their diets in the wild. A variable diet consisting of proteins and vegetables should be given daily. They will also benefit from other meaty foods such as finely shredded frozen seafoods, cyclops, vitamin-enriched brine shrimp and mysis shrimp. These food groups can be provided as flakes, sinking pellets, frozen or freeze dried. Flake food for herbivores and other color enriching foods can be provided also to help maintain their dazzling appearance.

Small amounts of food several times a day is the recommended feeding schedule for these Damsels. Feeding often helps to avoid and alleviate and aggression in the tank with other species. As they are non-aggressive fish, they could miss out on proper nutrition if other larger, more aggressive fish are dominating the water column during feeds. Sinking pellets are very effective as they tend to reach the bottom of the tank where the Yellowtail Blue Damselfish likes to reside. Pellets should be wet before feeding out to avoid air entering fish’s digestive tracts. 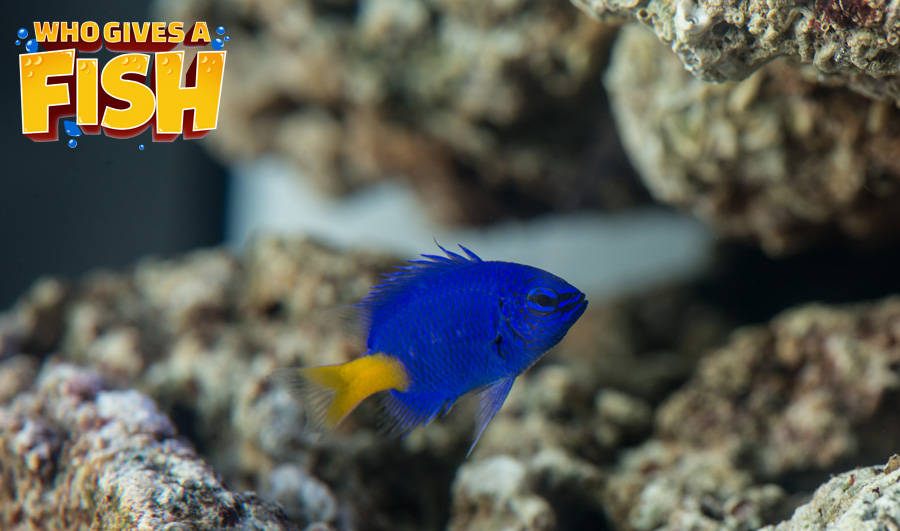 A young Yellowtail in a home reef tank

There are currently no known differences, apart from males who are generally thought to be slightly larger.

Damsels are quite similar to clownfish and follow many of their breeding patterns. Perfect water conditions are required for successful breeding and the absence of any predatory species. Be aware that crabs, wrasses, serpent stars and bristle stars will east eggs and larvae from the damsels. Their eggs are smaller than that of a clownfish and even harder to rear.

The Yellowtail Blue Damselfish are known to spawn in captivity very readily. Water temperatures need to be kept between 79°F to 83°F (26°C to 28°C). Like others in the same genus, males will keep their own territory which is close to their nesting site which will be a burrow in the sand or a clam shell. The day prior to spawning the ritual begins with females visiting the different males in her colony. Once a suitable partner is selected she will stop swimming, face upwards and flash a light ring around each of her eyes.

Once this signal has been sent to the male of her choice, the male of whom she wants to spawn with will begin his own act of display. Females will also rate these displays. Soon after, the male will lead the female back to his nest to show her how many eggs he has. Females can be seen to spend up to 20 minutes inspecting males sites before moving on to a new male. During this evaluation the female wont be ready to lay her eggs until she is completely satisfied with her decision. Females have been observed travelling up to 325 feet (100m) between different nesting sites.

At the arrival of dawn the following day, the female will then spawn with the male of her choice, the one she has deemed to be the fittest and healthiest. This if most often the biggest male who has the most eggs in his nest. If there is more than 1 female that has chosen the same male, the females will wait outside the entrance and wait their turn. Up to 4 females can be seen waiting outside a single males nesting site at any one time.

Some nests can have up to 10,000 eggs, a combination of several females. Some males have been seen to abandon their own sites to take control of bigger sites that have been abandoned by other males. The more eggs a male has in his site, the more chance he has of being selected by a female for spawning. Males will guard these eggs until they have hatched which is in between 1-4 days in the wild, a time frame dependent on water temperature. The larval stage for species in Chrysiptera is between 10-50 days.

Yellowtail Damselfish will spawn very easily in a captive marine tank. Females will deposit around 300 eggs, of which will hatch within 96 hours is the temperature is around 84˚F (28˚C), generally hatching once the lights have been switched off. Olivotto, 2003, suggests that once they are all hatched the larvae should be fed PUFA first and keeping the lights on for 24 hours a day for larvae to survive. This will then produce “green water” ensuring higher water quality by reducing any waste from the larvae. 10%-30% water changes per day are recommended as well as cleaning the base of the tank being essential.

The Yellowtail blue Damselfish is the most less aggressive of the damsels found in the genus of Chrysiptera. However, like all the damsels they can still exhibit territorial behavior and slightly aggressive when in a mated pair- more so as they get older. This behavior is still nothing compared to that of their cousin the Blue Devil Damsel, Chrysiptera cyanea.

Their temperament shadows that of the less aggressive clownfish species. They may be kept in small groups if housed with other peaceful damselfish and a rate of 15 gallons per new fish added. During spawning males will become heavily protective over his eggs and may even require separate tanks if other males start becoming harassed by this behavior. Tanks of at least 60 gallons will help avoid this situation from occurring.

Fellow tank mates should be allowed to become established in the tank prior to the damsels being added. They don’t seem to be affected much by other peaceful and semi-aggressive damsel fish and clownfish. Clarkii clowns are not a good choice if clownfish are also desired for the tank as they can be quite aggressive. If adding clownfish, you should choose between Pink Skunk Clownfish, Ocellaris and Percula Clownfish. Tanks that are over 55 gallons will allow both species to live harmoniously as long as territories are kept at least 2 feet apart.

If your tank is to contain semi-aggressive fish, be sure to constantly observe the tank for any harassing going on towards your Yellowtail Blue Damselfish. Damsels may be attacked by aggressive dwarf and pygmy angelfish and aggressive roaming clownfish. Species that are larger and semi-aggressive should not be kept with damsels e.g. the anthias or other bigger aggressive fish. These damsels are often the ones who will get picked on first by larger and more aggressive fish. Predatory fish should not even be an option as a damsel will quickly become a meal for them.

Yellowtail Blue Damselfish will do very well in a reef setting as they pose no threat to any of your corals. Branching corals are some of their favorites to reside in, with the corals benefiting from the flutter of their fins to prevent buildup of any debris – with the Bottlebrush Acropora being on of their favorites. Corals will also benefit from the damsels enjoyment of picking off algae from their bases. A copepod may disappear every so often, however large and small inverts are not in danger.